A Beginner’s Guide to Pre-Mixed Insulin

Disclaimer: This guide is not meant to constitute medical advice and must only be used for informational purposes. We do not guarantee the accuracy of any information contained in this guide. Always consult with a medical professional before making any changes to your diabetes treatment regimen.

Diabetes can be a complex condition and learning to navigate the many options available for treatment can seem like a daunting task. A quick peek at the list of insulin products available can leave most patients feeling paralyzed by having so many options to choose from. Fortunately, this is not a problem that patients need to (or should) navigate alone; physicians and pharmacists should be able to work with you to tailor a treatment plan that meets your individualized needs.

What is insulin, anyways?

Simply put, insulin is a chemical that communicates with various parts of the body to control the uptake of sugar into cells, thereby controlling sugar levels in the bloodstream. For most people, insulin is not something they think about too often, if at all; their bodies are capable of producing and responding to this important chemical messenger without requiring any conscious input or assistance from the individual. However, the story is much different for diabetics.

People who suffer from diabetes either have a pancreas that is incapable of producing insulin (as with type 1 diabetes), or have a resistance to insulin that prevents their natural insulin supplies from communicating effectively (as with type 2 diabetes). Fortunately, for many decades, pharmaceutical companies and researchers have been working together to develop synthetic versions of insulin that allow diabetics to supplement their insulin deficiencies or insensitivities with an external supply, thereby greatly improving their health and quality of life. 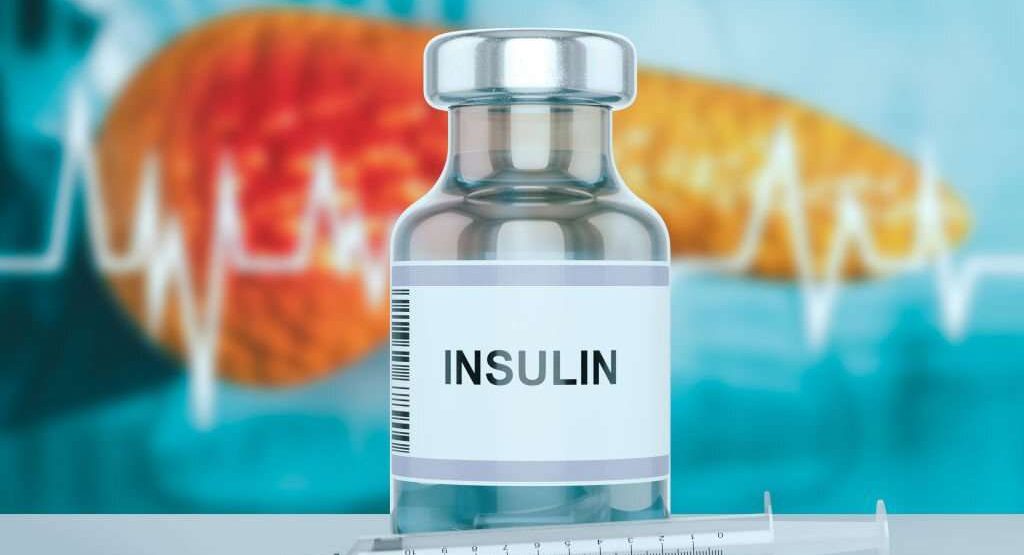 Insulin vial and a syringe on the hospital bench with pancreas in the background. 3D rendering

Why Are There So Many Options to Choose From?

Although insulin exists in a natural form in our bodies, many synthetic versions of insulin (called “analogues”) have also been created for the treatment of diabetes. These analogues are all fundamentally similar in that they have the same effect in the body: to signal to cells to import glucose form the bloodstream as a source of energy within the cell. However, each analogue varies slightly in terms of the speediness, strength, and duration of this effect. For example, many insulin analogues can be classified as either fast-acting or intermediate-acting, which means they either take effect very quickly and last for a relatively short period of time, or take effect more gradually and over a longer period of time.

The reason so many different analogues have been created is because no two diabetics have the same exact insulin needs. Depending on an individual’s lifestyle factors, including their activity levels, stress levels, sleep schedules, body weight, and diet, they may have wildly different insulin needs compared to another diabetic individual. Having a plethora of insulin analogues to choose from allows diabetic patients and their physicians to choose the products that best suit their particular needs and optimize their health outcomes.

What Are Pre-Mixed Insulins and How Do They Work?

As the name suggests, pre-mixed insulins are insulin formulations that are dispensed to patients as a combination of multiple insulin variants, typically with differing and complimentary properties. The idea behind pre-mixed insulin is that each individual diabetic body may have many overlapping needs for insulin at any given moment, each of which would benefit most from a unique insulin analogue with unique properties. By mixing these different analogues together and receiving them as a single dose, patients can increase the scope and efficacy of the insulin coverage within their bodies without needing to fuss around with multiple injections and prescriptions.

The need for different insulins for different scenarios can be illustrated with the following comparison. Shortly after a person eats a meal, a quick and sudden spike in blood sugar typically occurs as the food is digested and the carbohydrates from the food enter the bloodstream. For a diabetic, this might call for a shot of fast-acting insulin to combat the quick and sudden spike in blood sugar resulting from the meal. Between meals, there may not be any such sudden spikes; however, blood sugar can also climb slowly between meals, as more complex carbohydrates are digested, and the body gradually releases stored energy into the bloodstream. This can result in a slower increase in blood sugar that would benefit from a more intermediate-acting insulin that can tide the body over until the following insulin injection at the next meal. A pre-mixed insulin injected at or just before a meal can deliver both forms of insulin and simultaneously respond to both the immediate and longer term needs.

Pros and Cons of Pre-Mixed Insulin

Pre-mixed insulins carry several benefits that make them an appealing option for some diabetics. The main advantage of pre-mixed formulations is the convenience it affords its users. Whereas a patient might otherwise need to time multiple injections throughout the day of different formulations, and have to keep track of multiple vials and dosages, a patient with pre-mixed insulin can forget about all of those details and simply take one or two injections of one prescription each day.

The convenience of pre-mixed insulin does not come without its disadvantages, of which there are several. First, intermediate forms of insulin, such as Neutral Protamine Hagedorn (or NPH for short, also called “isophane insulin”), are not always predictable in terms of their duration and effect. This means that they may or may not meet the longer term insulin needs of a diabetic patient, resulting in potential episodes of hypo- or hyper-glycemia between meals or in the evening. While some intermediate-acting alternatives to NPH are more predictable, they do not always mix well with fast-acting insulin formulations, and therefore cannot typically be used in a pre-mixed insulin formulation.

The second disadvantage results from the fact that it can be difficult to find a pre-mixture with the correct ratio of fast- and intermediate-acting insulin to suit a particular patient’s needs. Increasing or decreasing the relative dosage of one component in the mixture can therefore increase the likelihood of experiencing episodes of hypo- or hyper-glycemia. It is critical to work with your team of health care providers to find the mixture that best suits your needs if you decide to opt for a pre-mixed formulation.

Lastly, pre-mixed insulin can make it harder for patients to supplement their insulin dosages throughout the day as needed. For example, if a patient experiences a sudden blood sugar spike between meals, pre-mixed insulins do not give them the ability to only take the fast-acting variety of insulin without the added and unnecessary dose of intermediate-acting insulin. This lack of flexibility can make pre-mixtures a less versatile option for treatment. Again, it is critical that you speak to your healthcare team for medical advice on how to manage your insulin needs throughout the day.

There are a variety of pre-mixed insulin products available on the market that may be helpful for a particular patient’s needs. The following list summarizes some of the most popular mixtures available. These mixtures tend to carry similar risks of side effects, but may require slightly different dosing schedules. Always refer to the advice of your doctor or pharmacist, as well as the information provided with your prescriptions, when using any insulin product.

Common side effects of insulin mixtures can include allergic reactions, skin irritation at the site of the injection, and a thickening of the skin at the injection site called lipodystrophy. Some of these effects can be mitigated by choosing different injection sites and rotating through them with successive injections. More serious and less common side effects can include fluid retention (known as edema) and heart failure. This list is by no means exhaustive, and each person may experience unique side effects from different products. Speak to your doctor about any concerns about potential side effects or interactions with other medications that you may be experiencing.

This mixture contains 50% fast-acting insulin (insulin lispro, which starts acting roughly 15-30 minutes after injection) and 50% intermediate-acting insulin (insulin lispro protamine suspension, which reaches its maximum effect 2-4 hours after injection). It is available in vials and prefilled pens, and is typically taken 15 minutes prior to eating a meal.

This mixture is similar to the Humalog Mix (50/50), but contains 75% intermediate-acting insulin and 25% fast-acting insulin. It is also available in vial and pen form.

This mixture contains 70% intermediate-acting insulin and 30% short-acting insulin. Effects of this mixture usually kick in roughly half an hour after injection and continue for roughly 24 hours. It is available in a vial, and must be administered with a syringe. This mixture is usually taken 30-45 minutes prior to eating a meal.

Not all diabetic patients will be well suited for using pre-mixed insulin. Typically, pre-mixed insulin will be most helpful for elderly patients, patients with regular and predictable daily meal and activity patterns, patients with a diminished capacity for managing many different prescriptions (such as those with poor vision or cognitive impairments), or those who are new to insulin treatment and may not be familiar with the nuances of the different insulin alternatives and their respective activity profiles. This does not mean that other demographics would not also benefit from pre-mixed insulin; ultimately, the choice of which insulin treatment a patient should take is a matter for a patient and their health care providers to determine together.

In many ways, insulin is an excellent example of the miraculous nature of modern medicine. Not only is insulin often a reliable and effective treatment for diabetes that can vastly improve a patient’s prognosis, but the large (and constantly increasing) number of insulin products and generics available on the market mean that patients have a large degree of flexibility in how they treat and live with their condition. While they will not be an ideal solution for every patient, they are a welcome and useful addition to the list of treatments available for living a healthy and happy life with diabetes.