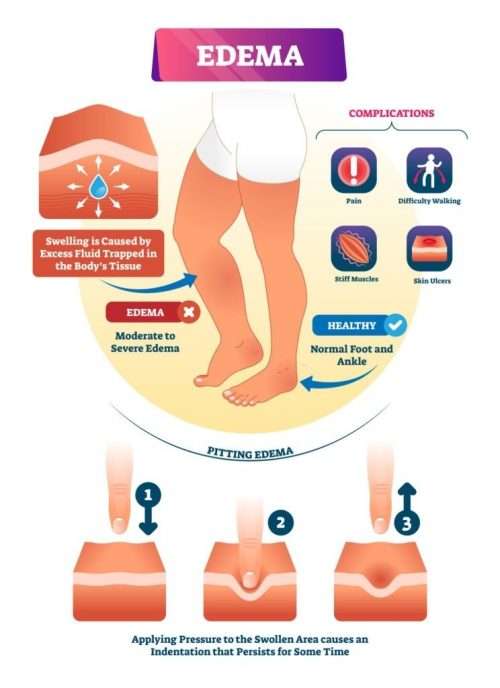 Edema is fluid buildup in the legs when the tissues or blood vessels in your legs or other body parts hold more fluid than they should. This excess fluid is trapped in the tissue and has yet to return to the circulatory system. Edema can occur in any part of the body – feet, calves, arms and hands. According to Focus Medica, edema is very common with almost 3 million cases per year in the U.S. It can last several months or years and is common in ages fifty and older. Some types can be life threatening.

According to the Mayo Clinic, the doctor will first perform a physical exam and ask questions about medical history to understand what might be causing the edema. This information is often enough to determine the underlying cause of the edema. In some cases, X-rays, ultrasound exams, magnetic resonance imaging, blood tests or urine analysis may be necessary.

Edema can occur with prolonged standing or sitting. Edema may be diagnosed as “pitting edema” where an indentation occurs when pressure is applied with a fingertip.

Heart valve problems and edema – Individuals with heart valve problems may develop edema or swelling. The tricuspid valve ensures the blood flows in the right direction  within the heart while the pulmonary valve ensures blood flows properly from the heart to the lungs.   According to MayoClinic.com, pulmonary valve regurgitation can overtax the right side of the heart, causing it to fail. When regurgitation occurs, fluid builds up in the body, resulting in edema in the feet, legs, hands  and abdomen. 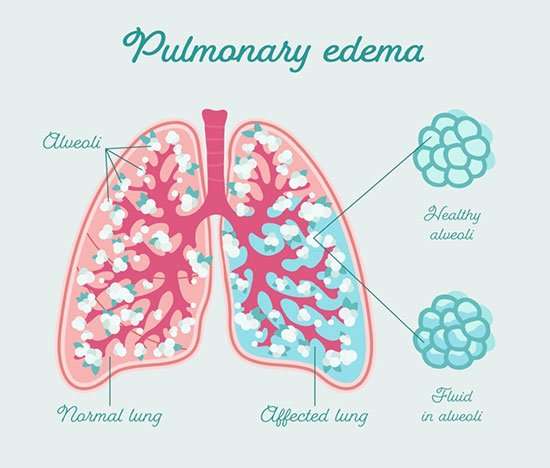 Lungs and edema –  Pulmonary edema occurs when fluid accumulates in the air sacs of the lungs (alveoli) making it hard to breathe. This interferes with gas exchange and can cause respiratory failure, in which the blood doesn’t have enough oxygen or has too much carbon dioxide. Sometimes both problems occur. During breathing the lungs take in oxygen. The oxygen passes into the blood, which carries it to the organs.

DVT and edema – DVT, is a blood clot that occurs in a vein which is a blood vessel  that carries oxygen-poor blood back to the heart (versus arteries, which are blood vessels that carry oxygen-rich blood throughout your body). DVT blood clots usually occur in the leg, though they can occur in the arm or other veins. The clot can block blood flow and lead to painful swelling in the affected limb.

CHF and edema – CHF can cause peripheral  (arms and legs) swelling and edema in the abdomen. In CHF, the heart is too weak to transport blood around the body, therefore the blood gathers in front of the heart. Because of the increased pressure in the heart, the fluid leaks into the surrounding body tissues. Clients monitor their water weight gain by weighing themselves with a scale daily. They can gain up to ten pounds from extra fluid build-up before feeling something is wrong or notice swelling. 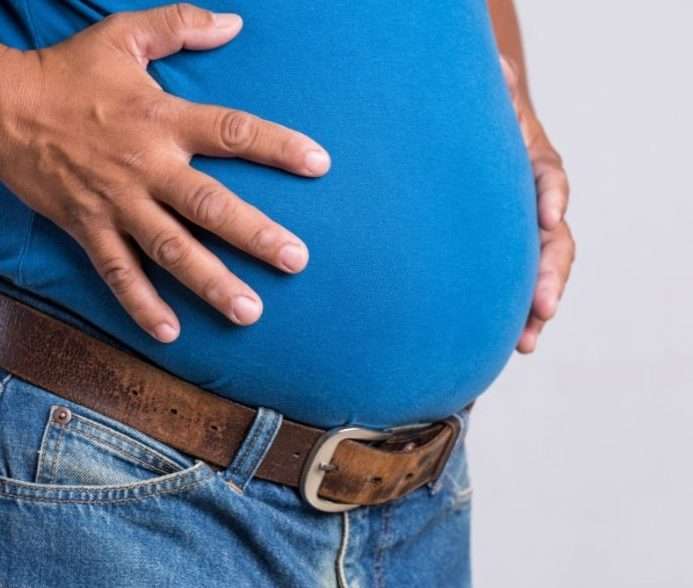 Venous insufficiency (VI) and edema –  In VI, the walls of the veins or valves do not function effectively to circulate the blood around the body,  especially in the legs, which result in peripheral pooling of blood known as stasis, a state of inactivity of the blood. In patients with varicose veins. VI leads to a backup of blood and increased pressure in the veins, thereby resulting in edema of the legs and feet. VI may cause more edema in one leg than the other, in contrast  to CHF in which the amount of swelling is the same in both legs.

Kidney failure and edema – The  edema associated with kidney disease usually occurs in the  ankles, feet and around the eyes. Damage to the tiny, filtering blood vessels in the kidneys can result in a condition called nephrotic syndrome. This is a condition resulting in declining levels of protein (called albumin) in the blood and excreting too much protein in urine which can lead to fluid build-up and edema.

Pregnancy and edema – Edema is a normal response to the inflammation caused by pregnancy. During pregnancy blood volume and bodily fluids increase by 50%. This excess fluid is to sustain the developing baby. Being pregnant can cause edema in the legs as the uterus puts pressure on the blood vessels in the lower trunk of the body. The excess fluid is stored by pooling in the legs, ankles and feet.  Edema also occurs in the face and hands.

Medications and edema – Many medicines have a side effect of causing edema. These include:

Hot weather and edema – Standing or sitting for long periods of time in and of itself can cause edema in the feet, ankles, and lower legs. Hot weather can further aggravate this. This is often referred to as  “heat edema”.

Lack of exercise and edema – A sedentary lifestyle is more likely to cause swollen ankles or feet.  Dehydration can  also make swelling during activity worse. As you continue to exercise, your muscles generate heat that makes your system push blood to the vessels closest to the surface of your body, to dissipate heat. This response triggers perspiration and may also contribute to hand swelling. For those who are obese, swelling is more frequent with less physical activity. 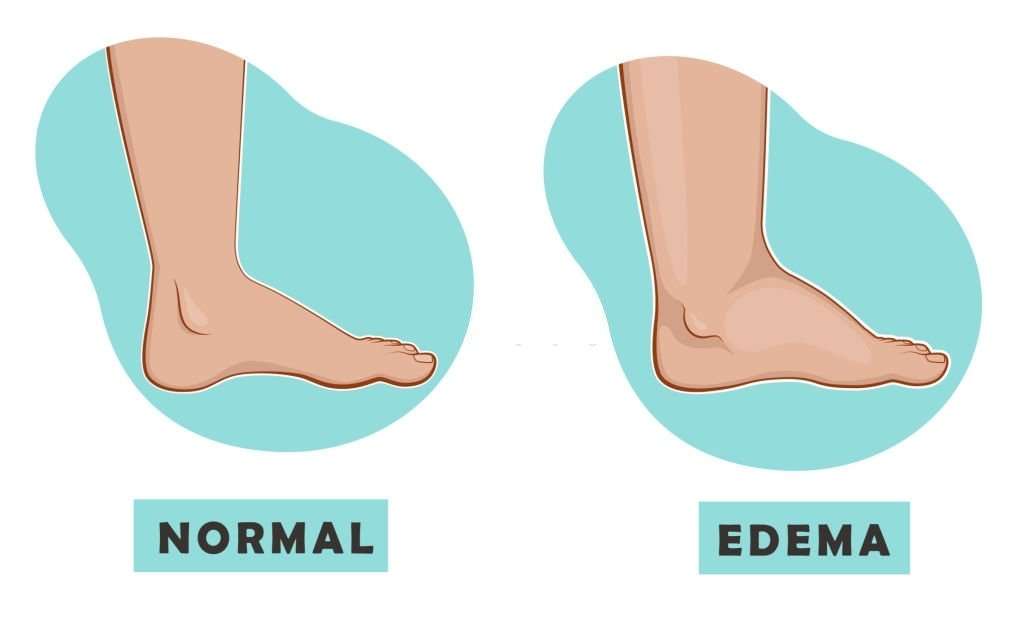 Diabetes and edema – Persons with diabetes tend to heal slowly.  Swelling can occur after a foot or ankle injury. Due to neuropathy or lack of feeling a person with diabetes may not notice such an injury immediately. Also, if left untreated, high glucose levels can also damage the lining of smaller blood vessels. This damage can result in poor blood circulation and pooling of blood in legs, ankles and feet. 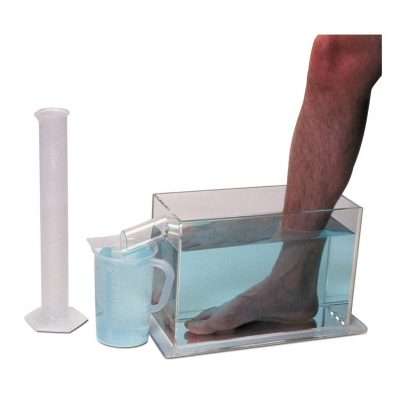 Edema can be measured by volume using a volumeter

How is it measured?

Edema can be measured by volume using a volumeter, by girth or circumference using a tape measure, or by pitting edema measurement which determines the depth and duration of an indentation.

To use a volumeter the edematous body part is inserted in a translucent container which contains water, some of which is displaced into a receiving beaker once the body part has been immersed. The displaced water is measured by the volumeter in millimeters. If there is a wound, a volumeter would not be used but instead the girth or circumferential method would be used and measured in centimeters.

A third way to determine the extent of the pitting edema, would be to push on the skin with the thumb or index finger, measure the depth of the indention, and record how long it takes for the skin to rebound back to its original position. It will then be graded on a scale from 1-4 with 4 being the greatest depression and the longest time to rebound.

For girth determination, measure and record in centimeters (cm) the circumference of both lower legs 10 cm (ankle) and 30 cm (calf) up from the heel. For all the above methods a comparison is made with the alternate body part.

What you can do:

According to Cleveland  Clinic and Mayo Clinic there are a number of treatments that can be implemented to deal with edema.

For patients with CHF, these measures would be advised: treating coronary artery disease (CAD). CAD develops when the major blood vessels that supply the heart become damaged or diseased. Cholesterol-containing deposits (plaques) in the coronary arteries and inflammation are usually to blame for CAD. Monitoring weight, fluid, and  cutting down on salt intake and alcohol consumption are advised.  If the cause is related to a medication, the medication should be stopped or reduced under doctors’ supervision.  All of these measures (and those discussed below should be taken under the supervision and guidance of your doctor and other qualified medical practitioners.

In addition to treating the underlying diseases, there are a few other steps that can be taken to keep fluid from building up in the body. Put a pillow under the legs when lying down or sitting for prolonged periods and keep the legs elevated above the level of heart. Elevating the limb during sleep may be helpful. Do not sit or stand for long periods of time without moving.

Wearing support stockings or compression garments for the arm or hand which put pressure on the extremities and keep fluids from collecting in legs and ankles is helpful. Some stockings can be purchased at most drugstores. Some require measurement by a professional at a durable medical supply store or surgical supply store. Compression garments should be worn during the day and applied in the morning when the limb is at its’ smallest. Often a special device is necessary to apply compression stockings; seek the advice of an occupational therapist. 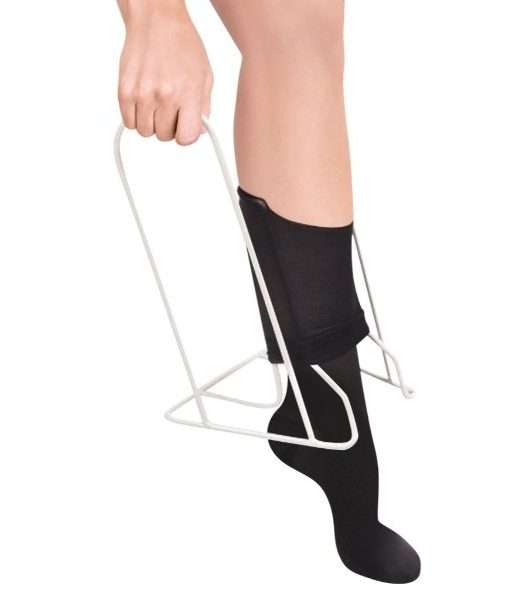 Compression stockings are helpful for managing swelling in the feet, ankles and lower legs. The constant pressure helps prevent fluid buildup in the tissue which can be very painful.

Moving and using the muscles in the part of the body affected by edema, especially the legs, may help pump the excess fluid back toward the heart. The doctor or a therapist will know exercises that can be done to reduce swelling.

Massaging or stroking the affected area toward the heart using firm, but not painful, pressure may help move the excess fluid out of that area.

Always follow doctor’s directions for taking prescription medications. The doctor might want a diuretic (commonly called a “water pill”) to be taken. A diuretic helps the body get rid of excess fluid. Mild edema usually goes away on its own, particularly if  the affected limb is positioned higher than the heart. More-severe edema may be treated with drugs that help the body expel excess fluid in the form of urine (diuretics). One of the most common diuretics is furosemide (Lasix).

Keep the affected area clean, moisturized and free from injury. Dry, cracked skin is more prone to scrapes, cuts and infection. Always wear protection on your feet if that’s where the swelling typically occurs. Protect any swollen areas from additional pressure and extreme temperatures. Injury to the skin over swollen areas takes longer to heal and is more likely to become infected.

Call your doctor immediately if you have any pain, redness, or heat in a swollen area, have an open sore or experience shortness of breath or swelling of only one limb.