The Relationship Between Diabetes & Poverty

For years, diabetes was considered a ‘disease of the rich’, mostly affecting elderly people in developed countries.

Diabetes was never given a lot of focus by governments or healthcare providers in developing countries, and the chances of getting proper treatment are low. In poorer countries, healthcare aims to address diseases such as malaria, HIV, and TB, or specific disease outbreaks.

According to the World Health Organization (WHO), the prevalence of diabetes is growing most rapidly in low- and middle-income countries, and around 80% of all diabetes cases in the world are from these countries.

More than 34 million people (13% of the population) in the US are living with diabetes and 96 million have pre-diabetes. Diabetes and its complications are associated with poor health, shortened life expectancy, and impaired quality of life. In 2017 alone, $237 billion was spent in the US on direct medical costs related to this disease. Diabetes and its complications is disproportionately larger for racial and ethnic minority groups, low-income individuals, and rural residents.

Percentage of adults in the U.S. with diabetes as of 2016, by income: 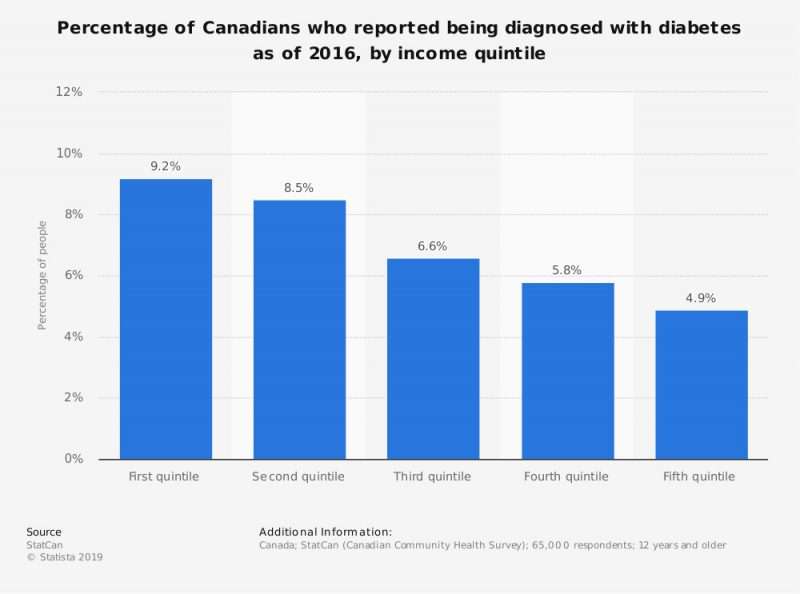 The Cost of having diabetes in the United States

The average cost of diabetes management per person in the US is $9,601 out of their total medical expenditure which averages $16,752. Those with diabetes are likely to spend 2.3 times more on healthcare than those without the condition.

On a national scale, 1 in 4 health care dollars in the United States is spend on care for those with diabetes. More than half of the US health care expenditure can be attributed to diabetes.

Indirect costs can impact the economy as whole which include:

Why poorer people are more at risk

Income-related inequalities in diabetes have widened over the past decade.

Poor living conditions put low-income adults and children at risk of diabetes and numerous other diseases. People living in poverty must often choose between paying rent or transport, feeding their children, or managing their health.

The chronic stress of low-income living can adversely affect their health. Cortisol is a hormone that is released when people experience stress and helps the body deal with stress. When the body is under continuous stress over time, cortisol levels will be constantly elevated, and it can cause an increase in blood sugar levels and blood pressure.

Studies have shown that the very conditions that contribute to diabetes also make it extremely difficult to manage the disease, meaning low-income patients are suffering from some of the most debilitating side effects.

Diabetes is a big problem for poor people and their families in the United States. It is a chronic disease that requires long-term care and medication. The lack of care and the complications from diabetes, such as stroke, high blood pressure, blindness, foot amputation, and kidney failure, will affect the person’s ability to work and provide for their household and family. Even if care is available, insulin is often too costly for them. Many patients don’t have private health insurance and must pay for supplies and medication from their own pockets This increases poverty and will also affect the next generation.

Excess medical costs associated with diabetes were $9,601 per person in 2017. A study by Yale researchers reported that one in four patients use less insulin than their prescribed diabetes treatment (or nothing at all) because of expensive out-of-pocket costs for the medications, devices, and supplies they need.

People with lower-income jobs have little time to take care of their health. They also don’t have paid time off, and some companies do not pay their workers a living wage, forcing them to work longer hours than higher-income workers. This leaves them little time to prepare and eat healthy meals, exercise, and learn about their health. The high prevalence of diabetes in poor communities affects everyone.

For many people living in poverty, having a poor diet is usually not a choice. Fast food or cheap, low-quality carbohydrates tends to be cheaper than fresher, healthier alternatives, and contain large amounts of salt and sugar.

Their jobs require long or unusual hours and contribute to dietary malnutrition. They don’t have time to prepare meals, or have the resources to choose healthier options, so keeping a healthy diet can be extremely challenging.

This makes it more difficult for people who are living below the poverty line to manage their weight. They can’t afford fresh and healthy foods which are necessary to maintain a proper diet. In turn, an unhealthy diet can also lead to obesity.

The high prevalence of diabetes in low-income communities can also be attributed to the lack of health literacy and education in these areas. People who live in poor communities and who are educated in low-performing schools do not have access to resources to learn about science, health, and exercise. They most likely have not been taught the importance of eating healthy and exercising, or how to research these topics on their own.

If education can be improved and community outreach in low-income communities be increased, it can also have the potential to impact diabetes prevention.

Exercise can play an important role in the management of diabetes. People who live in poorer neighborhoods, often lack access to free and safe physical activity programs which can reduce weight and stress.

For many Americans living in poverty, going for a check-up can become costly. In 2013, the average price for a new, uninsured patient going to see a primary care physician was $160. For a single parent making minimum wage and raising kids, they might have to choose between going to the doctor and paying rent. If people don’t go to the doctor, it becomes impossible for healthcare providers to assess their health and recommend changes to di