How Diabetes Can Affect Our Body

Many of us are aware of the complications that diabetes can present in a general sense and in certain areas of the body.

For example, you probably know that type 1 diabetes is especially relevant to the pancreas or that all forms of diabetes affect blood sugar.

But diabetes is chiefly a metabolic disorder, meaning it harms the

body’s ability to process nutrients. This, paired with the fact that it’s rooted in the circulatory system, means that the condition impacts the body in many different areas, head to toe.

Any part of the body is susceptible to the ill effects of diabetes. Some conditions are caused directly by hyperglycemia, while others are simply common infections or injuries that take advantage of a diabetic body’s weakened ability to make repairs. Let’s break down how diabetes affects each part of our body.

How Diabetes Affects The Kidneys 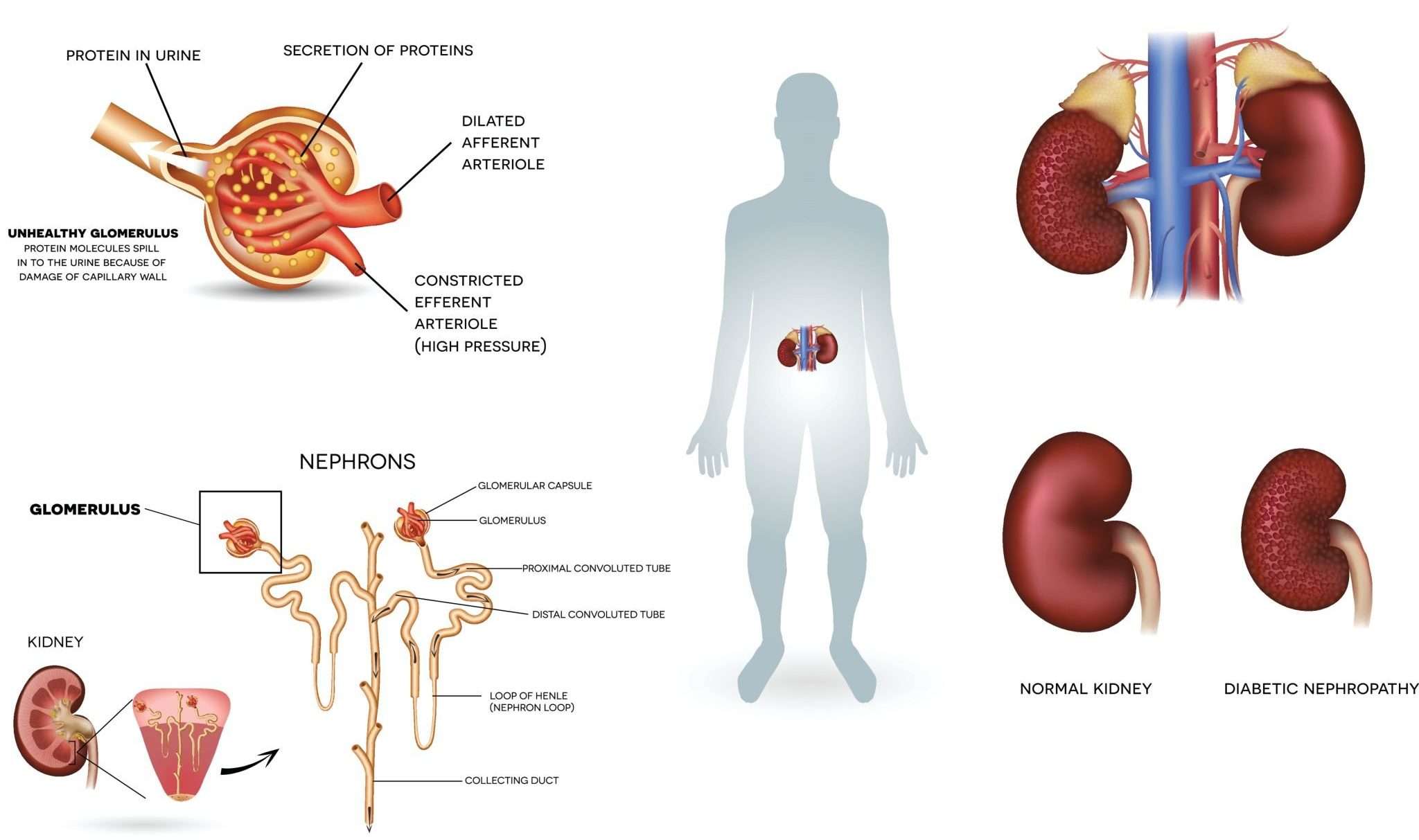 Your kidneys exist for the general purpose of filtering blood and processing it into urine. More specifically, they

Kidneys operate via a network of very small blood vessels. High blood sugar levels can clog these blood vessels, which makes it harder for the kidneys to complete those important tasks and puts them at risk for kidney disease.

As the kidneys are damaged, the urine gets darker because less blood is filtered out. In the early stages of diabetic nephropathy, tests on the urine can be done for blood proteins (such as albumin), which would ordinarily be removed by healthy kidneys.

How Diabetes Affects The Feet 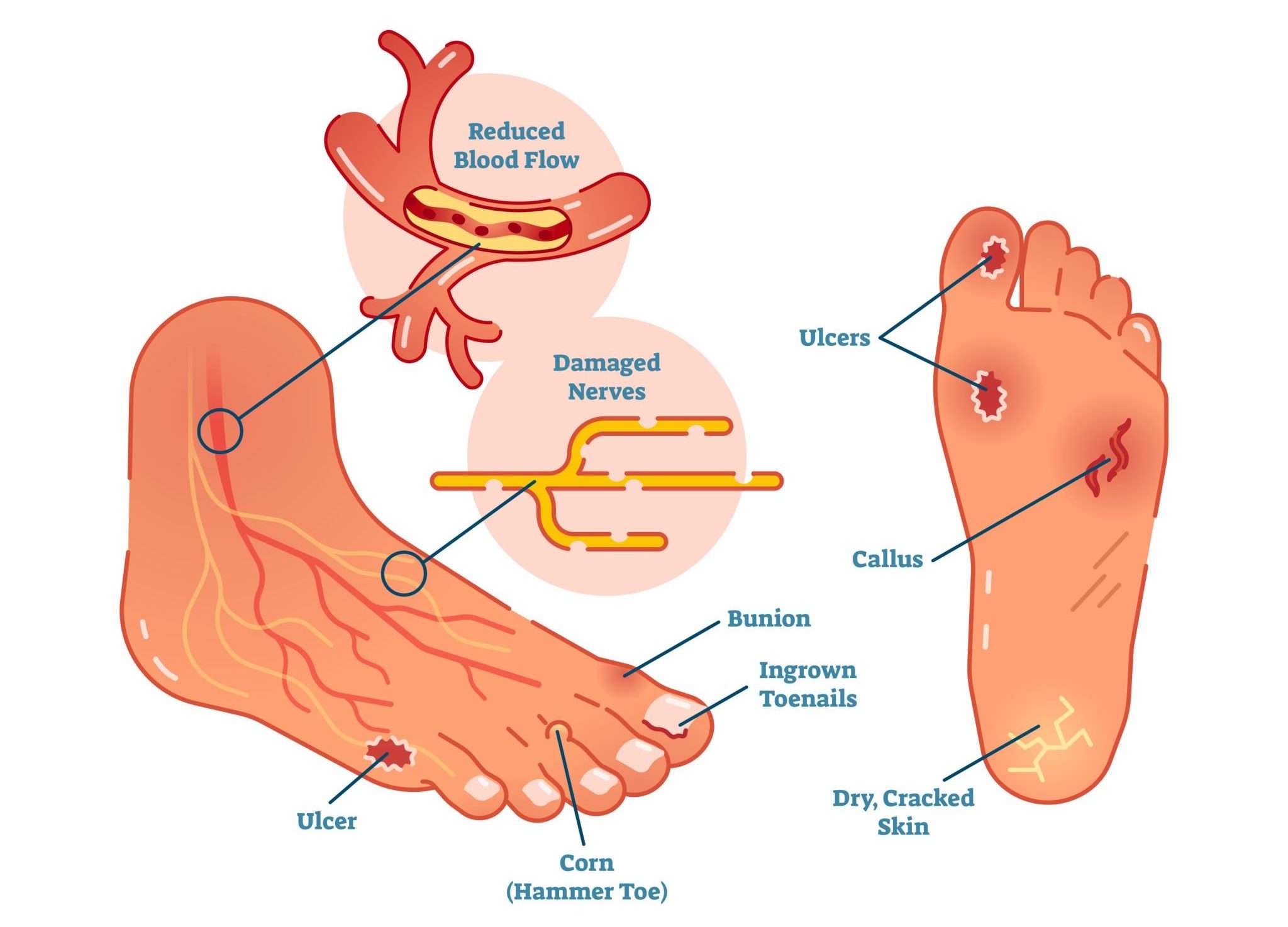 Even though they don’t seem related to high blood sugar, your feet can be negatively impacted by diabetes.

About 50% of people with diabetes report increased sensitivity, pain, or loss of feeling around their bodies due to nerve damage, which itself is caused by the constriction of blood vessels. Diabetics can experience nerve damage all over, but it typically starts in the feet.

Because of this nerve loss in the feet, diabetics are more susceptible to foot injuries such as cuts and blisters, which are harder to notice without functioning pain receptors. Open wounds like these can get infected, which is especially serious with poor blood flow and can lead to gangrene or the need for amputation.

It’s recommended that diabetics take extra care to protect their feet, including wearing socks and shoes as frequently as possible and checking for injuries on a regular basis.

How Diabetes Affects The Heart

The most common way for an American to die right now is from heart disease, which is no exception for diabetics. Almost 70% of people with diabetes will die from a heart-related illness or stroke.

The connection between diabetes and heart disease is clear: damaged blood vessels over time worsen the other main causes of heart disease, such as cholesterol buildup and high blood pressure. All of this can end in heart failure, where your heart can’t pump blood well.

Not being able to pump blood is bad news: while heart attacks occur in extreme cases, hypertension and blockage that come before them aren’t great either. Diabetics with heart failure frequently experience coughing up blood, trouble breathing, swollen legs due to fluid buildup, and nausea.

How Diabetes Affects The Eyes

As we’ve seen with numerous other body parts in this article, blood vessel damage due to diabetes is highly destructive. When this happens near your retinas, it’s known as diabetic retinopathy. Your retinas (which line the back of your inner eye) are important because they’re responsible for turning light into vision. When they don’t get the blood they need, blindness can occur.

While diabetic retinopathy is the number one cause of blindness for adults with diabetes, there are a host of other eye conditions that high blood sugar can worsen.

In the middle of the retina is an area called the macula which makes your vision clear and sharp. Blood vessels that swell near this area can cause blurry vision, known as macular edema.

Other major eye diseases can be worsened by diabetes. For example, people with diabetes are more likely to develop cataracts, and their cataracts grow at faster rates than non-diabetics.

There’s even a specific type of glaucoma caused by diabetes called neovascular glaucoma, wherein extra blood vessels are formed against the iris of the eye. The vessels put pressure on the eye, resulting in vision loss.

How Diabetes Affects The Reproductive System

While the male and female reproductive systems are affected differently by diabetes, both fertility and reproductive health are at risk.

In men, damage to blood vessels can make it difficult to get or maintain an erection. It can also decrease testosterone levels and, as a result, libido.

In women, it can cause irregular menstrual cycles and decrease the chances of pregnancy. Similarly to men, damaged blood vessels can also lead to sexual dysfunction from decreased libido and an inability to produce vaginal lubrication.

Diabetes can also interfere with key reproductive hormones that are necessary for conception to occur at all. It also creates more potential for vaginal health risks, such as infection or damage to the fallopian tubes.

If a pregnancy does occur, babies born to diabetic mothers tend to be larger (which increases the chances of needing a cesarean section). When the baby is born, it is more likely to be born still or with congenital problems.

How Diabetes Affects The Skin