Humalog vs Novolog: What are the Main Differences? 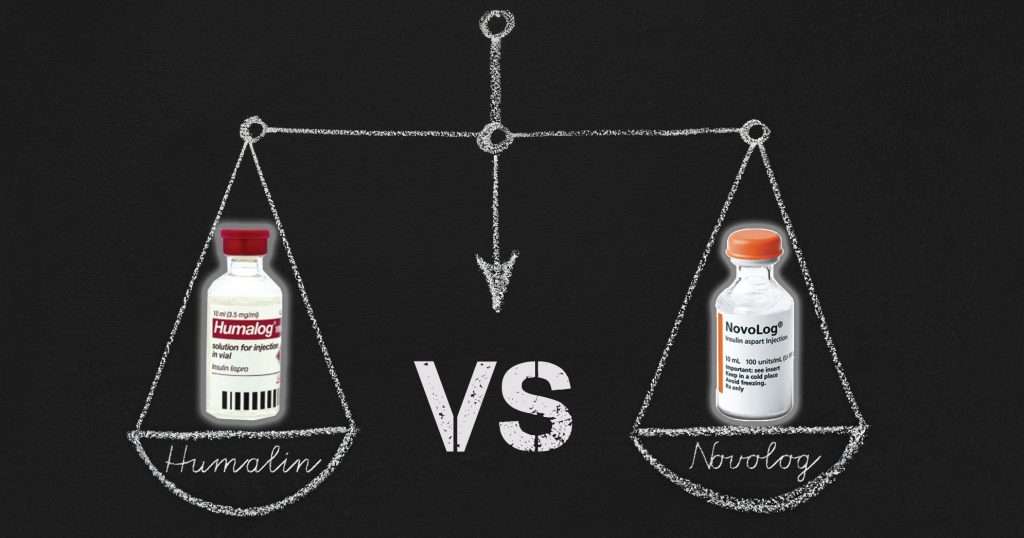 If you are already using insulin then you already understand that it’s a hormone that is naturally created in the body but can also be taken as a medication.

Two of the most common synthetic insulin medications used by type 1 and 2 diabetics is Humalog and Novolog.

Both of these diabetes treatments are rapid acting which means their effects are quicker than most types of insulin.

In this article we will compare Humalog vs Novolog, examine their differences and similarities to find out which is is right for you.

Humalog and Novolog share several similarities such as how they are taken, effectiveness in regulating blood glucose levels and side effects.

Both are rapid acting. According to the American Diabetes Association estimates that both types of insulin begin to work after 15 mintes.

Both of these treatments can last up to four hours and usually peak after 1 hour. Since they may vary slightly, it’s important that you check your blood sugar levels after use.

It’s recommended to eat within a short period of using either drugs. Hypoglycemia (low blood sugar) may result if eating is delayed after taking either of the rapid acting insulin medications.

Both medications should not be used together but instead included in a regiment with other intermediate and/or long lasting insulin.

Humalog vs Novolog – The Main Difference

Humalog is an insulin aspart, which differs from human insulin based one a single substitution of proline with aspartic acid in position B28.

Both include of these minor substitutions increase the rate of blood absorption after subcutaneous injection.

Novolog can be used to treat adults and children as young as 2 years old. Humalog on the other hand hasn’t been studied in children younger than 3 years old.

Novolog has a faster absorption rate and should be taken closer to meal time. For best results its best to use 5-10 minutes before eating.

Humalog is recommended to be taken 15 minutes prior to meal time otherwise take it after you finish eating.

Novolog can be diluted to create a lower dose. This can be done by using a Novolog diluting medium but it’s important to be properly instructed by your doctor prior to trying this.

Humalog vs Novolog – Common Side Effects

Most insulin medications have similar side effects. The most common is hypoglycemia (low blood sugar). It’s important to monitor blood sugar levels so they don’t go too low, especially if taking too much.

Other common side effects include diarrhea, nausea, headaches and weight gain.

It’s important to notify your physician if you experience any side effects.

Insulin prices in the United States have steadily rise over the years. The cost of these insulin medications can vary depending on your health insurance plan.

Both Humalog and Novolg are similar in price. These insulin brands do not any generic versions available. Both are sold as cartridges or vials.

With a prescription from your doctor, you can save up to 80% when you buy insulin online from Canada. BuyCanadianInsulin.com ships insulin directly to residents in the US.

Use the coupon code “FIRST10” on our website and save 10% on your first order.

Humalog vs Novolog – Who Should Take Them?

Humalog is used to treat both type 1 and type 2 diabetes in both adults and children who are at least 3 years of age.

In contrast, Novolog can be taken by children who are at least 2 years of age.

Humalog is available in the following:

NovoLog is available in the following:

If you are sensitive to insulin or any of its preservatives and fillers then you should not be taking this medication. Furthermore, if you have any serious symptoms or reactions such as an allergic reaction or shortness of breath, you should stop taking the medication immediately. In both cases, consult your physician on other treatment options available such as oral medications.

In one small study comparing these two medications with people with Type 1 diabetes found there was no difference between the two groups taking them. Insulin levels were similar 30 minutes after injection. After four hours both medications were absent in the blood. The study found that there were no significant differences and both Humalog and Novolog had similar effects on glucose, carbohydrate and fat metabolism.

Both Humalog and Novolog are rapid acting insulin medications for those who have big swings in blood sugar levels throughout the day. They work very similarly but have subtle differences. Be sure to consult a doctor or pharmacist to find out which one is best for you.