The Different Types of Insulin Pumps Available In 2022

For those with type 1 diabetes, multiple injections of insulin are required daily in order to maintain normal blood sugar levels. This strict regimen may also apply to certain patients with type 2 diabetes as well.

The primary methods of insulin injection are either manually by syringe or insulin pen, or automatically by insulin pump.

The multiple daily injection regimen via syringe or insulin pen is time consuming and can be disruptive to normal daily activities. For this reason, using an insulin pump to deliver insulin automatically and continuously can make daily insulin therapy easier and less intrusive.

The different methodologies for insulin delivery require different types of insulin. The two most common types of insulin available are rapid acting and long acting.  The former is generally taken before meals or when there is a spike in blood glucose levels, and the latter is taken to maintain glucose levels within normal range between meals, or over other long periods without eating, such as overnight.

Insulin injections via syringe or insulin pen uses both types of insulin, depending on the time of day and kind of activity; an insulin pump uses only rapid-acting insulin as it is continuously injecting insulin in small amounts to maintain healthy blood sugar levels.

Here is the information you need to understand how insulin pumps work, their advantages and disadvantages, and what kinds of insulin pumps are available to you right now. 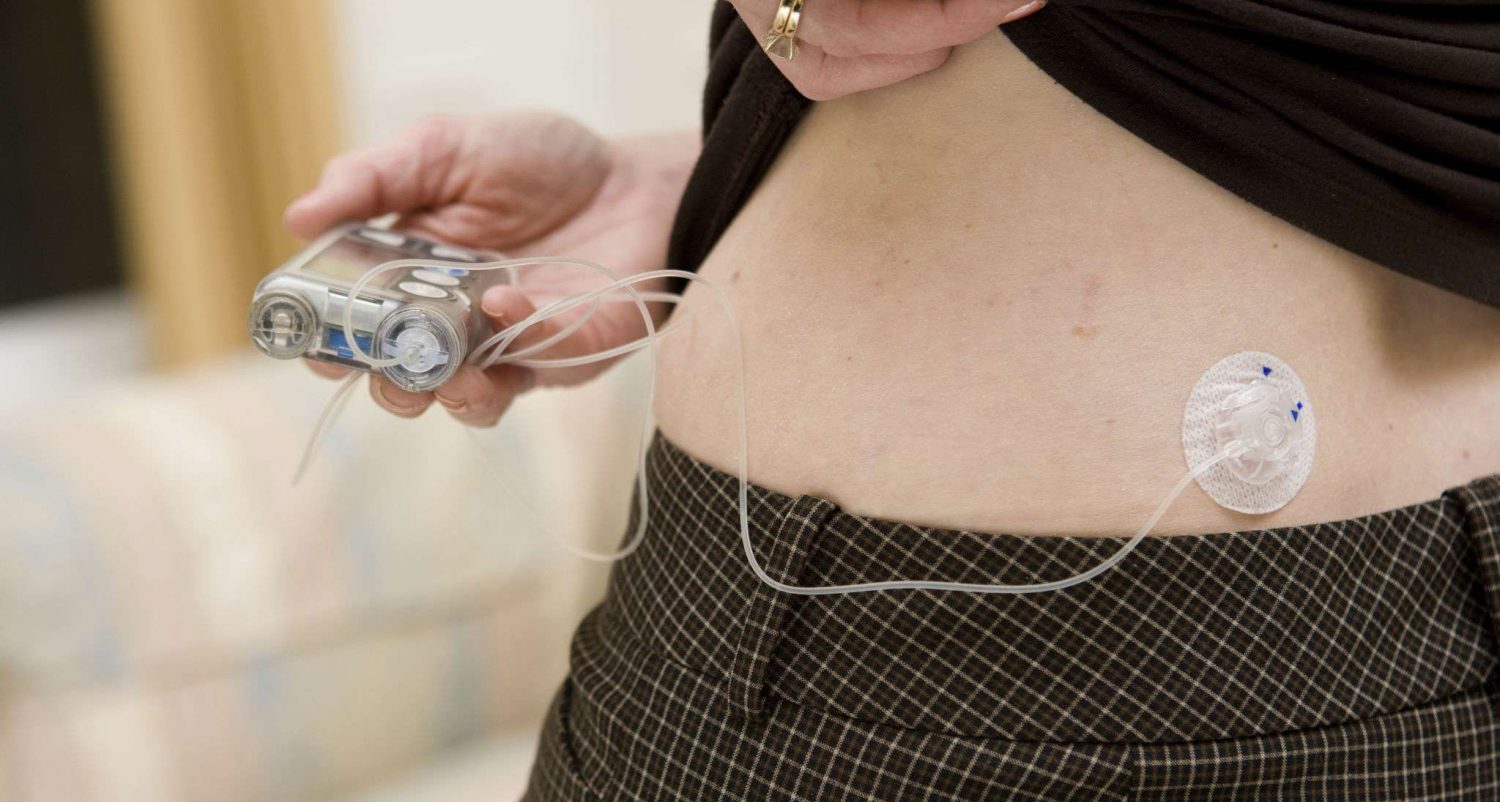 What is an insulin pump?

Insulin pumps are computerized instruments about the size of a pager which are designed to deliver insulin subcutaneously on a pre-programmed schedule. The insulin is delivered by a narrow tube or cannula that is placed just under the skin by a thin, short needle.

While the insulin pump itself is quite durable, certain components must be replaced every few days.  These include, of course, the insulin itself, the reservoir, tubing and the infusion set.

What are the basic parts of an insulin pump? 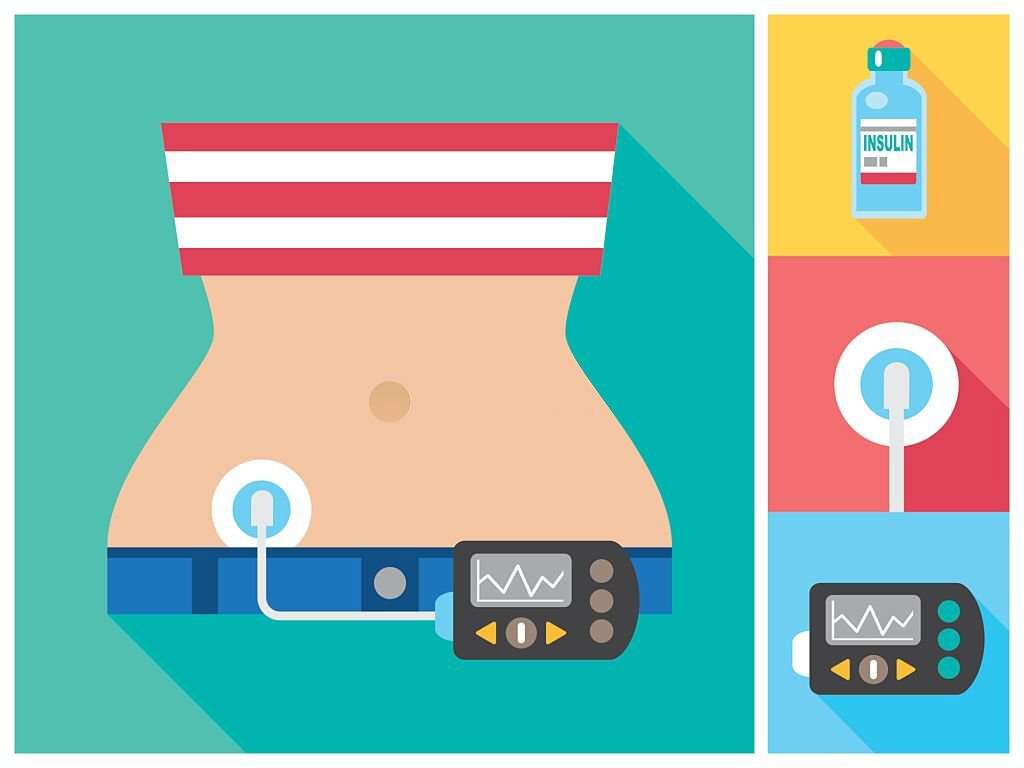 Insulin pumps contain a set amount of insulin, the pumping mechanism, computer chip, battery and screen.  These are external pumps, worn outside the body, and connected to the infusion set by thin plastic tubing.

These pumps can be worn attached to a belt, attached under one’s clothing by a strap, or by using an adhesive patch on the stomach or arm. They can also even be carried in a pocket.

The infusion set is the connection that enables insulin to flow into the skin from the pump.  A strong adhesive is used to attach it.  At the base of the infusion set is a short thin cannula or tube that pierces the skin and rests in the subcutaneous fatty tissue.

There is also a second type of insulin pump available: the tubeless pump, aka “the Pod”

In this tubeless system, a Pod filled with insulin is worn on the body, where the insulin can be injected, just as with the tubed pump.

The Pod contains an integrated infusion set that automatically inserts the cannula under the skin. Another piece of this tubeless system, the controller, controls the activity of the Pod. A major benefit of this system is that this controller only needs to be near the user to deliver a surge (“bolus”) amount of insulin, or to change infusion settings; it does not need to be attached to the user’s body.

However, the same general operating principles apply regarding how all pumps work, their advantages and disadvantages.

How does an insulin pump work?

Insulin is delivered by insulin pump either as small, continuous doses (basal insulin) throughout the day, or by surges near mealtimes (bolus insulin).

The use of an insulin pump still requires checking blood sugar levels at least four times a day. An easier alternative is to use a continuous glucose monitor (CGM) that will provide continuous glucose readings. More recently, automated systems have been developed that provide for continuous data feed from the CGM to the insulin pump to automatically adjust insulin doses.

The pump uses this information about food intake and blood sugar levels to calculate how much bolus insulin is needed. The pump then recommends a bolus dose to the user, and delivers it after approval. In addition, some pumps can automatically adjust the basal doses based on blood glucose levels transmitted from a continuous glucose monitor as well.

Defining the terms “basal” and “bolus” for insulin delivery

Basal insulin, also known as background insulin, is rapid acting insulin that is automatically and continuously delivered throughout the day in small controlled amounts by an insulin pump. It is delivered at a rate previously determined by the healthcare provider to keep glucose levels within the desired target range between meals and overnight. This timed delivery, known as the basal rate, eliminates the need for long-acting insulin.

An important benefit of insulin pump therapy is that the basal rate can be adjusted based on the user’s anticipated basal insulin needs. The user can then set different rates for different periods of the day when they may need more or less insulin.

Bolus insulin is the insulin delivered before eating or in response to an elevated blood glucose spike. The user can signal the insulin pump to deliver the bolus dose as needed. Depending on the design of the pump, the user can decide to take the bolus dose all at once or stretch all or part of it over a number of hours.

Advantages of using an insulin pump

NOTE: You should always need to have regular injectable insulin on hand in case the pump stops working.

Disadvantages of using an insulin pump

This information is derived from “An Insulin Pump Guide from DiabetesMine” and updated for 2022. 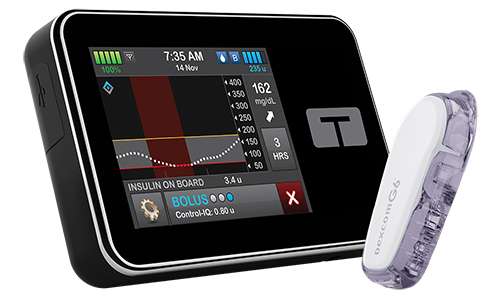 The X2 is the latest version of this brand of touchscreen insulin pump from the California company Tandem Diabetes Care, which first introduced it back in 2012. The X2 has built-in Bluetooth connectivity, and it received FDA approval in 2016.

Tandem’s t:slim X2 is a tubed insulin pump with advanced features including a touchscreen and a newly designed cartridge for the insulin.  Instead of the traditional clear hard case inside reservoir, the insulin is stored in a flexible bag.

What also sets the t:slim X2 apart is the unique capability to remotely update the unit from home, a first in the diabetes pump world. This feature allows users to update the pump’s capabilities just by connecting it to Tandem online, rather than having to buy a new piece of hardware.

At this time, the t:slim X2 only works with the Dexcom CGM. However Tandem has agreements for the future integration of the t:slim X2 with other CGMs, including the Abbott FreeStyle Libre flash glucose monitor.

Their Minimed 670G was approved by the FDA in 2016 as the first-ever “hybrid closed loop system” that automatically monitors glucose and adjusts basal insulin doses. It has been approved for use by people 14 and older with type 1 diabetes (T1D). The 670G monitors glucose using the Medtronic’s Guardian 3 CGM and automatically adjusts basal insulin dosage to keep users as consistently as possible at the targeted blood sugar level of 120 mg/dL. It has the ability to alert users that they are at risk for low blood sugar, and it can then adjust insulin doses accordingly or shut off background insulin entirely if the user’s blood sugar level falls to that level.

In 2020, Medtronic launched the 770G. This newer model has Bluetooth connectivity so that it can sync with smartphone apps. More significantly, this system has FDA approval for adults and children as young as 2 years old right from the start, instead of approvals starting with adults and doing pediatric studies later, which is traditionally the case.

This is Medtronic’s most advanced insulin pump system and it is approved for treating type 1 diabetics between age 7 and 80 years old.

It looks just like the 670G and 770G, but it includes these advanced features: 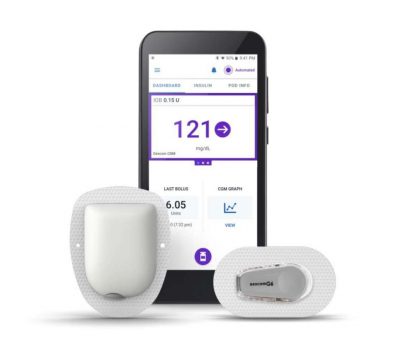 This is the most advanced tubeless insulin pump on the market

After its initial launch in 2005, this system went through a several iterations before the Omnipod DASH system was released in 2019. Insulin is delivered via a small pod attached to the skin that is remotely controlled using a PDM (Personal Diabetes Manager). The DASH model is already equipped with built-in Bluetooth, and a touchscreen PDM.

The newest Omnipod 5 model is Insulet’s first closed loop technology that can sync with the Dexcom G6 CGM.  It allows remote control of insulin delivery via a mobile smartphone app. The FDA approved it in 2022 and it is now available.

Pumps for those with type 2 diabetes

While insulin pumps have been primarily focused on the T1D population requiring intensive insulin therapy, data shows that these devices can also benefit those living with type 2 diabetes (T2D) who use insulin as well.

Beyond the pumps already discussed, there are two others aimed specifically at the type 2 diabetes population: 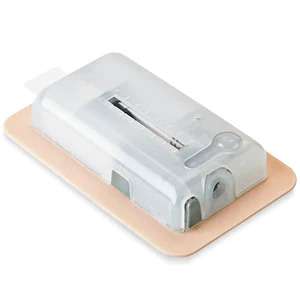 This innovative single day disposable patch-on pump was first available in 2011, and by 2019, over 20 million devices had already been sold.

This stick-on patch unit (with no plastic tubing) holds a single day’s worth of fast-acting insulin, and it is preset to deliver at one of three different basal (background insulin) rates for the day.

These new pods use Eli Lilly’s more concentrated U-500 insulin, which makes the tubeless pump a real option for patients who require large amounts of insulin, as is the case for many type 2 diabetics.

What is the best insulin pump for you?

It is best if you discuss the different insulin pumps available with your healthcare professional to decide which might work best for managing your diabetes.

User reviews can be very useful when deciding on which insulin pump may be right for you.  Check out the product reviews at DiabetesMine.  These provide useful information on the Medtronic, Omnipod, and Tandem pumps.

Insulin pumps may be a great option for both adults and children with diabetes as they offer many features to optimize glucose control, including customization in how to personally manage diabetes, as well as different supply options. While these are costly medical devices that insurance does not always cover, insulin pumps are helping many diabetics, both type 1 and type 2, live healthier, less stressful lives.