The Medicare Donut Hole & How to Avoid It

The Medicare Donut Hole is a nightmare that affects far too many Americans. It’s also known as the Medicare Prescription Drug Coverage Gap, describing a slew of patients who fall into a specific bracket that leads to enormous healthcare costs. It’s been getting less severe, but still makes an enormous impact on millions of families each year.

What is the Donut Hole? 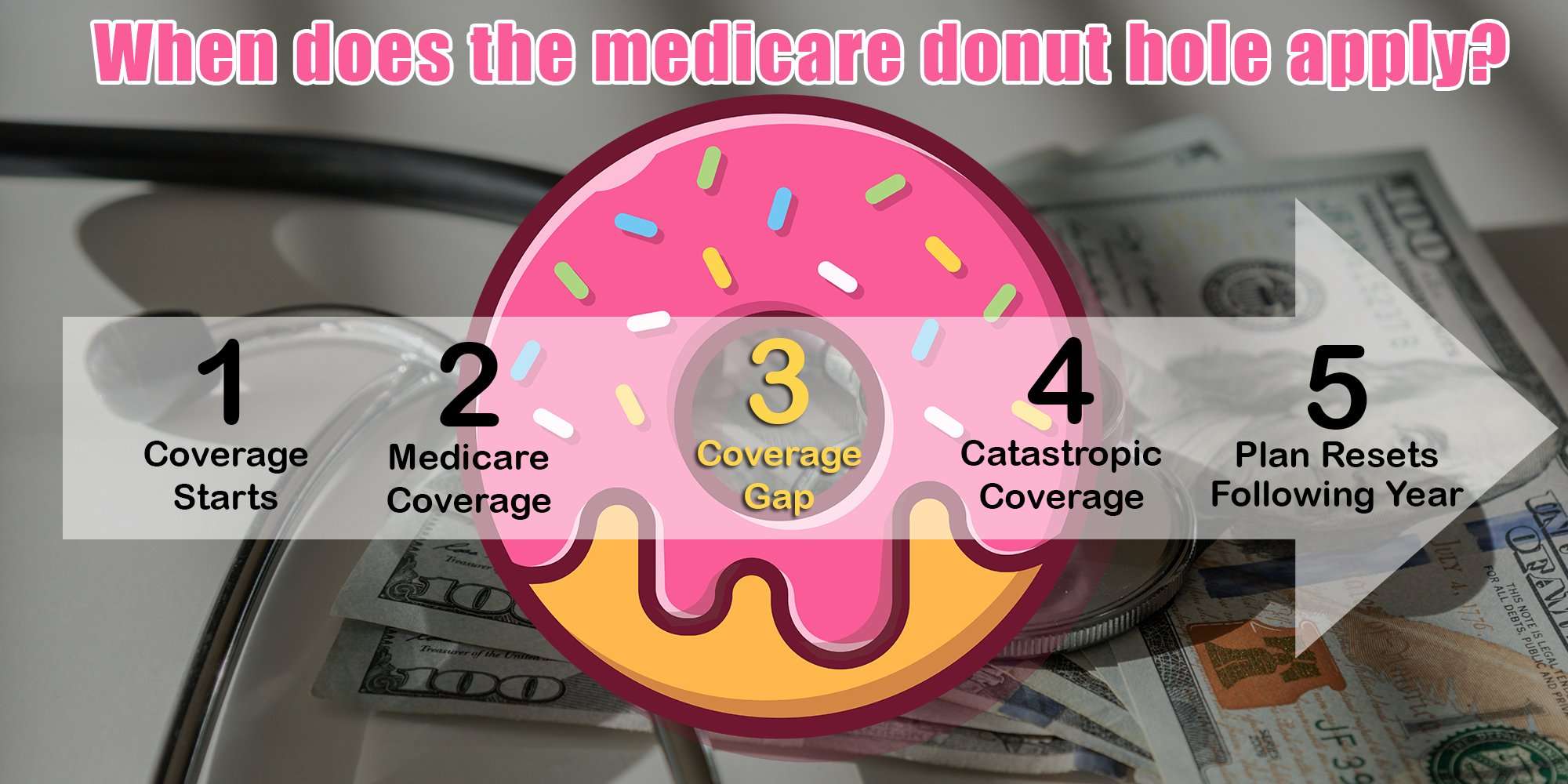 The Donut Hole started up when the Medicare Prescription Drug Program came into existence in 2003. It’s a feature of Medicare’s Part D Plans. It refers to the phase after your initial coverage period, when you’ve reached a certain limit on how much you’ve paid for medical expenses within the year. That number varies, but in 2022, the limit is $4,430.

In the past, if you reached the Donut Hole, you would have to pay 100% of the cost of your prescription drugs until you reached a limit known as the Catastrophic Coverage period. In 2022, that threshold is $7,050.

The format of the Donut Hole changed in 2019, but it still exists; now, if you’re in the Hole, you have to pay 25% of the cost of your medications, on top of your co-pay. That goes down to 5% once you get to the Catastrophic Coverage Period (or whichever is greater between 5% or $3.95 total for generic drugs and $9.85 for brand name ones).

The premium you pay for having healthcare coverage does not apply toward getting you out of the gap. However, the amount you pay toward your prescriptions is lower than the amount that counts toward exiting the Donut Hole. The manufacturer pays 70% of the cost of the drug for people on Medicare, and that combines with the 25% the plan holder pays. Here’s the example Medicare provides on its website:

“Mrs. Anderson reaches the coverage gap in her Medicare drug plan. She goes to her pharmacy to fill a prescription for a covered brand-name drug. The price for the drug is $60, and there’s a $2 dispensing fee that gets added to the cost, making the total price $62. Mrs. Anderson pays 25% of the total cost ($62 x .25 = $15.50).

Why Does the Donut Hole Exist?

The gap was created in an effort to keep the costs of the program down, benefiting the government rather than the patient in some instances. That might have been more palatable when the program was first being implemented, so public spending on it was kept to a minimum.

The Congressional Budget Office has found that having private insurers implement the Medicare system led to it being 22% more expensive each year than it would have been if it were run publicly. That’s because those companies pay large sums for their shareholders, executives, and marketing campaigns. Congress also prohibits Medicare from negotiating discounts on drugs with the manufacturers of those medications.

Getting Out of the Donut Hole

The Donut Hole is the space between $4,430 and $7,050 spent on medication and doctor’s visits. That resets at the start of every year.

Once you reach Catastrophic Coverage, you stay there with no limit on how much you can spend on prescriptions while in that phase. Your bills decrease immensely, but it’s a tough time reaching that point. As you’re in your initial coverage portion, the count up to $4,430 includes both the cost of your premiums and what you’ve paid toward doctor’s visits and medications. When you’re in the Gap, your payment toward the plan itself doesn’t count.

The Affordable Care Act (Obamacare) mandated a gradual phase-out of the Donut Hole. After it passed in 2020, it set up a system so that pharmaceutical companies have to pay for a greater portion of the cost of the medication, which is why patients now pay 25% of their drug costs while in the Donut Hole, rather than 100%.

What Counts Toward the Gap and What Doesn’t?

Not all of the money you spend on your healthcare will help you get out of the Donut Hole. For instance, your monthly premiums to be part of the Medicare system don’t affect your status within the gap. The money your plan pays (typically about 5%) toward medication costs doesn’t help you out either. Certain drugs are also not covered by your Medicare plan, and payment for those drugs won’t apply toward your race to Catastrophic Coverage.

The number of people enrolled in the Medicare Advantage and Part D plans has been increasing rapidly. There are 27 million beneficiaries of MA plans, as of 2022, and another 24 million on standalone Part D plans to help solely with prescription coverage. A new rule from the Centers for Medicare and Medicaid Services is expanding care and lowering out-of-pocket costs for drugs. However, that hasn’t been enough to get rid of the Donut Hole.

The American Rescue Plan has allowed more funding to be injected into Medicare and Medicaid. States now have through the end of March of 2025 to enroll for funding that would strengthen home- and community-based services for patients who need long-term care.

How to Avoid the Donut Hole

Before you pick a plan under Medicare, make sure to review all of your options to see whether you’re selecting the best one for your needs. Confirm that the plan addresses the specific medications you will need to take and that it has your preferred doctors’ offices and pharmacies included in its network. Certain plans may not cover certain specialists, too, and thus may not be the best option for you. If your plan doesn’t seem like a good fit, you may want to consider switching to another coverage option. You can do that during the open enrollment period from October 15th to December 7th each year. Some people may also qualify for a Special Enrollment Period where you can make changes to your plan if you’ve moved or lost coverage in a certain area.

The Medicare Donut Hole proves to be the biggest problem for people with ongoing healthcare costs that rack up bills over the course of the year. Since insulin and other care for diabetic patients become so expensive, people with diabetes can be especially susceptible to the Donut Hole.

There are also certain programs in place that can help pay for prescriptions or contribute to the cost of your premiums, like the State Pharmaceutical Assistance Program offered in some states, Patient Assistance Programs offered by manufacturers of some brand name prescriptions, and funds set up by charities to assist with the treatment of certain diseases and conditions. The Medicare Part D Extra Help Program also provides financial assistance for people of certain income levels, allowing them to skip over monthly premiums and deductibles.

“A beneficiary’s out-of-pocket costs for insulin in Medicare’s Part D prescription drug benefit can fluctuate from one month to the next and can be a barrier to appropriate medical treatment. This unpredictability, in part due to the complexity of the different phases of the Part D benefit, can lead to challenges for beneficiaries when budgeting for their drug costs and potentially not being able to afford their medicine or resorting to medication rationing. Medication non-adherence, due to cost or otherwise, could have devastating health consequences for seniors, ranging from nerve and vision damage to the kidney and cardiovascular disease and even amputations,” the CMS argued in 2020 when announcing the new plan.

That plan could help protect people from the Donut Hole, but only in regard to their insulin purchases. Most diabetics have other medical expenses too, so the $420 they’re paying toward copays on insulin (on top of the $600 for the premium plan) still brings them closer to the Donut Hole. That’s where BCI can make a huge difference.

BCI ships insulin from Canada, helping patients in the United States to save up to 80% on the cost of insulin & other medication. The medication is delivered straight to your door, packaged in thermal-insulated containers. You can choose your desired brand and product and have it delivered within 7-10 business days.