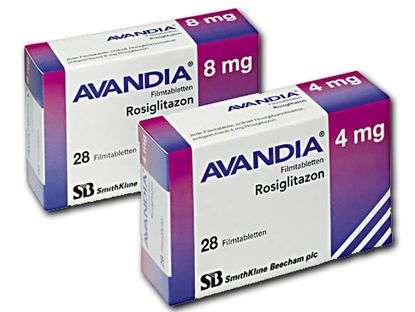 Avandia, also known as rosiglitazone, is an oral prescription medication. It is indicated in adults with type 2 diabetes mellitus (T2DM) to improve glycemic control in addition to diet and exercise. Avandia has some limitations to its use. These include:

Controlling hyperglycemia with Avandia prevents downstream complications such as kidney damage, loss of limbs, blindness, heart attack, stroke, or nerve problems. It is important that diabetes remains controlled to lessen the chance of related complications.

HOW DOES AVANDIA WORK?

Rosiglitazone is an antidiabetic agent belonging to the thiazolidinedione class. It betters glycemic control by increasing the body’s sensitivity to insulin. It is a potent and selective agonist of the peroxisome proliferator-activated receptor-gamma (PPAR?). The PPAR receptor is located in tissues key to insulin activity. These include adipose tissue, the liver, and skeletal muscle. When the PPAR? is activated, the body initiates transcription of genes that promote insulin response and glucose control. They PPAR? is also a key player in fatty acid metabolism.

Insulin resistance plays a key role in the pathophysiology diabetes. In animal models, Avandia decreases concentrations of blood glucose and lessens hyperinsulinemia through action in the muscle, liver, and adipose tissues. Avandia has also been shown to block gluconeogenesis in the liver. Avandia has also not demonstrated hypoglycemia or altered glucose tolerance in animal studies.

Common side effects of Avandia include:

The thiazolidinedione class is known to exacerbate or cause heart failure. Avandia, alone or with other antidiabetic agents, can cause fluid retention leading to heart failure. Physicians should monitor patients for signs and symptoms of heart failure, including:

If patients demonstrate symptoms of heart failure, providers should implement proper standards of care. Additionally, Avandia should be discontinued or dose-reduced. If patients have confirmed NYHA Class III or IV heart failure, Avandia is contraindicated. It is not recommended in those who have symptomatic heart failure.

A meta-analysis of short-term trials demonstrated an elevated risk of myocardial infarction with Avandia treatment versus placebo. However, longer-term studies did not show any increase in mortality or major adverse cardiovascular events (MACE) with Avandia compared with placebo.

In one study, there was a significant increase in median plasma volume in those treated with Avandia compared with placebo. Patients were more likely to experience adverse events if they were on concomitant therapy with Avandia and insulin. Therefore, in patients with edema, Avandia should be used cautiously.

Additionally, because thiazolidinediones can cause fluid retention, congestive heart failure can be worsened. Providers should monitor patients for heart failure symptoms.

Patients on Avandia both alone and in combination with other antidiabetic agents have demonstrated dose-related weight gain. Weight gain was likely associated with fat accumulation and fluid retention. Patients who exhibit weight gain should be evaluated for edema and congestive heart failure.

Thiazolidinediones, including Avandia, have been shown to cause macular edema. In trials, macular edema presented as blurred vision and lessened visual acuity. Some patients were asymptomatic. However, most individuals also were experiencing peripheral edema in addition to their macular edema. Diabetic patients and patients on Avandia should have routine eye exams.

Studies have demonstrated an increased frequency of bone fractures amongst females taking Avandia. Fractures typically occurred in the feet, hands, and upper arms. Providers should consider the fracture risk of the patient before starting Avandia and evaluate appropriately.

Individuals on Avandia also demonstrated dose-related reductions in hematocrit and mean hemoglobin. This is likely due to Avandia’s effect on plasma volume.

Individuals on other hypoglycemic drugs concomitantly with Avandia may be at increased risk for hypoglycemia. Providers may want to consider reducing the Avandia dose if patients are also on other antidiabetic agents.

CYP2C8 inducers such as rifampin may decrease the area under the curve (AUC) of Avandia. CYP2C8  inhibitors such as gemfibrozil may elevate Avandia’s AUC. Physicians should consider altering therapy if a patient is on a concomitant drug that affects Avandia concentrations.

USE IN SPECIFIC POPULATIONS

There is not much data available evaluating Avandia during pregnancy. It is not known if Avandia can cause miscarriage or major birth defects. Providers should consider the risks of uncontrolled diabetes during pregnancy when determining if therapy is appropriate.

There is no data evaluating Avandia’s presence in human milk, potential effects of Avandia on a breastfed infant, or its influence on milk production. Animal data, though, demonstrates presence of Avandia in rat milk. Animal models, however, are not always indicative of a drug’s effects in humans. Providers should consider the risks of uncontrolled diabetes in the mother and the potential adverse effects of the drug on the infant.

Other thiazolidines have induced ovulation in previously anovulatory women. Providers and patients should consider the risk of unintended pregnancy in premenopausal women looking to start Avandia.

Pharmacokinetic studies of Avandia indicate that age does not affect Avandia’s safety and efficacy. There were no differences in efficacy or safety when comparing those over the age of 65 and those under the age of 65. In older adults, no dose alterations are necessary.

How do I take Avandia?

Avandia should be taken as your doctor directs you to take it. The normal starting dose is 4 mg once daily or 2 mg twice daily. Depending on your blood sugar response, your provider may alter your dose. Avandia may also be taken with other diabetes medications if your blood sugar needs more control.

Does Avandia need to be taken with food?

Avandia can be taken with or without regard to food.

If you forget to take a dose, take it as soon as you remember. Take the next dose of Avandia at its scheduled time. Do not take two doses at once, however.

Should Avandia be taken long term?