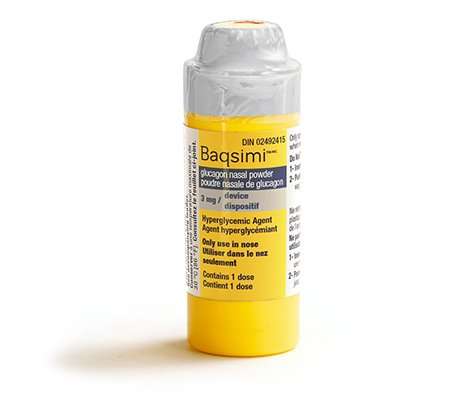 WHAT IS BAQSIMI NASAL GLUCAGON SPRAY?

Baqsimi is a form of glucagon that is given as a nasal spray. Glucagon is a natural hormone produced by the body that functions by increasing blood sugar via the liver. Glucagon is an active ingredient that has been around for years, but it is now available as the first and only nasal spray used to treat low blood sugar. A recent study published in Diabetes Care stated that intranasal administration of glucagon is just as effective in treating severe hypoglycemia as a glucagon injection.

Anyone who is on insulin is at risk for low blood sugar emergencies, making it important to have a product on hand to reverse the effects. Baqsimi is a great option when oral carbohydrates, sugar, or glucose tablets do not work. It is a single-dose product that is inhaled as a puff through the nose. It is indicated for the treatment of severe hypoglycemia for adults and children ages four and up.

Baqsimi functions by elevating the concentration of glucose in the blood. It works through activating glucagon receptors, Gs? and Gq, in the liver, initiating the breakdown of glycogen and the release of glucose by the liver. In order for glucagon to elicit anti-hypoglycemic effects, there must be glycogen stores in the liver.

Common side effects of Baqsimi Nasal Glucagon Spray include:

Significant Elevations of Blood Pressure in Those with Pheochromocytoma

A pheochromocytoma is a tumor located the adrenal glands that secretes hormones. Baqsimi should not be used in those with pheochromocytoma. This is because glucagon can cause catecholamine release from an existing tumor. If a patient experiences a significant increase in blood pressure, one can suspect an undiagnosed pheochromocytoma. In this event, providers should administer intravenous phentolamine mesylate at a dose of 5 to 10 milligrams (mg). This treatment has been efficacious in lowering a patient’s blood pressure.

Hypoglycemia in Those with Insulinoma

Those who have insulinoma (pancreas tumors) may experience an increase in blood glucose when they receive Baqsimi. This phenomenon can trigger an extensive release of insulin from an insulinoma, resulting in hypoglycemia. Therefore, Baqsimi should not be used in patients with insulinoma. If a patient experiences hypoglycemic symptoms after receiving Baqsimi, they should be administered oral or intravenous glucose.

Some patients have had allergic reactions after being administered glucagon. Symptoms have included rash, anaphylactic shock, difficulties breathing, and hypotension. Patients should not use Baqsimi if they have had a prior allergic reaction to glucagon products.

Absence of Efficacy in Patients with Decreased Hepatic Glycogen

Baqsimi will only work on hypoglycemia if there is enough hepatic glycogen available. Individuals who are in states of starvation, with adrenal insufficiency, or with chronic hypoglycemia often do not have enough hepatic glycogen present. Therefore, Baqsimi may not be effective in these types of patients. Individuals with these specific conditions should instead be administered glucose.

Individuals who are on beta-blockers may have transient elevations in pulse and blood pressure after being administered Baqsimi.

USE IN SPECIFIC POPULATIONS

In pregnant rat models, there was no sign of increased risk of malformations or embryofetal death.

There is no information available on how Baqsimi may affect a breastfed infant or milk production. Glucagon is a peptide that should be broken down into individual amino acids within an infant’s digestive tract. Because of this, harm to the infant is not likely if they were to be exposed.

Baqsimi is known to be safe and effective in children ages 4 and above. However, there is no data on the safety and efficacy of Baqsimi in those younger than 4 years old.

When do I use Baqsimi Nasal Glucagon Spray?

Use Baqsimi if you have a significant drop in blood sugar, specifically with a low blood sugar emergency. Baqsimi can also be used if you are not able to eat or drink to increase sugar intake. It is important that you and others be aware of the signs and symptoms of a low blood sugar emergency. Without symptom awareness of severe hypoglycemia, you are at a nine times greater risk than someone with knowledge of hypoglycemia symptoms. These symptoms may include:

How do I take Baqsimi Nasal Glucagon Spray?

It is important that you and those close to you know where you store Baqsimi and are aware of how to administer it if you experience a low blood sugar emergency. That way, if an emergency occurs, you and others are well-equipped to administer it correctly and treat you effectively.

Take Baqsimi exactly as your doctor tells you to take it. You should begin by taking off the Shrink Wrap by pulling the red stripe. Next, pop open the lid and take the spray out of the tube. Ensure that you do not click down the plunger until the device is ready to be used. The device should be held between the finger and thumb, placing the tip inside of the nostril. When you are ready to administer, push down on the plunger. You will know that the complete dose has been administered when the green line goes away. When administered intranasally, Baqsimi will typically normalize blood sugar levels in about 30 minutes. Do not administer insulin while you are waiting for a response. You can still take Baqsimi even with cold symptoms or when taking cold medicine. Alert your provider every time that you use Baqsimi.

What do I do after I use Baqsimi?

After administering Baqsimi, additional precautions should be taken. Emergency services should be called immediately. If the individual is not conscious, place them on their side. If able, have the individual intake a rapid-acting source of sugar. If they do not respond within 15 minutes, administer another dose.

How do I store Baqsimi?

Should I have multiple packs of Baqsimi?

Individual Baqsimi devices only contain one dose of glucagon. Therefore, it cannot be reused. Ask your provider if you can be prescribed a few packs of Baqsimi. This will ensure you are prepared in the case of an emergency no matter where you go. It may be smart to have multiple doses of Baqsimi on hand and keep them in a variety of different places. Some places you may put your Baqsimi include:

What is important to tell my doctor before I take Baqsimi?

It is important that you tell your doctor all of the medications, vitamins, and supplements that you take. Additionally, make sure to let your provider know if you:

What side effects may occur when taking Baqsimi?

Tell your doctor or seek immediate medical attention if you develop serious side effects such as severe allergic reaction, difficulty breathing, rash, or low blood pressure.

Signs of overdose include nausea, vomiting, elevated blood pressure and pulse rate, and inhibition of gastrointestinal (GI) tract motility. If an overdose is suspected, potassium levels in your serum may drop and thus should be monitored. If blood pressure is raised significantly, your provider should administer phentolamine mesylate.