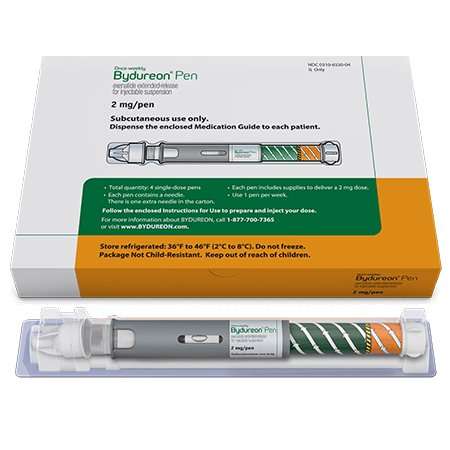 WHAT IS BYDUREON PEN?

Bydureon, also known as exenatide extended-release, is a weekly injectable prescription medication. It is indicated in adults and children 10 years of age and older with type 2 diabetes mellitus (T2DM) to improve glycemic control in addition to diet and exercise. Bydureon pen is a long-acting form of Byetta and is administered subcutaneously. Controlling hyperglycemia with Bydureon prevents downstream complications such as kidney damage, loss of limbs, blindness, heart attack, stroke, or nerve problems. It is important that diabetes remains controlled to lessen the chance of related complications. Bydureon is not recommended for the treatment of type I diabetes.

HOW DOES BYDUREON WORK?

Incretins are peptide hormones originating from the gut that are quickly released after a meal. The two primary incretins in humans include glucose-dependent insulinotropic polypeptide and glucagon-like peptide-1 (GLP-1). Incretins such as GLP-1 potentiate glucose-dependent insulin release and exert multiple antihyperglycemic effects after their secretion from the gut into the circulation.

Common side effects of Bydureon include:

Currently, it is not known if Bydureon can induce thyroid C-cell tumors, but those with a history of MTC should avoid use of Bydureon. Patients should look out for MTC symptoms, such as a neck mass, dysphagia, hoarseness, or dyspnea. If these signs are present, patients should be evaluated for thyroid disease.

Bydureon runs the risk of causing nausea and vomiting with transient hypovolemia, potentially impairing renal function. Bydureon has been reported to potentially cause elevated serum creatinine or worsen chronic and acute renal failure, resulting in the need for a kidney transplant or hemodialysis. In some cases, other drugs with renal effects such as angiotensin converting enzyme inhibitors and diuretics were being used concomitantly. Multiple cases of altered renal function have been reversed with supportive care and halting of causative agents. Because of these occurrences, Bydureon should not be used in those with an eGFR of less than 45 mL/min/1.73 m2.

Bydureon has been shown to cause gastrointestinal (GI) side effects such as nausea, vomiting, and diarrhea. Because Bydureon has not been analyzed in pre-existing GI disease like gastroparesis, it is not recommended for use in patients with serious GI disease.

Patients can have anti-exenatide antibodies following treatment with Bydureon. The presence of antibodies has been associated with an attenuated glycemic response. If glucose control worsens or glycemic targets are not reached, providers should switch patients to another therapy.

Drug-induced thrombocytopenia involves the immune system’s development of exenatide-dependent antibodies against platelets. When Bydureon is used, these antibodies can damage platelets and cause serious bleeding. Drug-induced thrombocytopenia can be fatal, and thus Bydureon should be stopped instantly if suspected. If confirmed, Bydureon should not be initiated.

Bydureon has been reported to cause severe injection-site reactions. These reactions include necrosis, abscess, and cellulitis, potentially with the presence of subcutaneous nodules. Isolated cases will necessitate intervention with surgery.

Other GLP-1 receptor agonists have been shown to cause acute occurrences of gallbladder disease, such as cholelithiasis or cholecystitis. If gallbladder disease is suspected, providers should provide appropriate clinical interventions and monitoring.

Use with Insulin or Insulin Products

Bydureon stimulates pancreatic beta cells to release insulin when high glucose levels are detected. There is a higher risk of developing hypoglycemia when Bydureon is used simultaneously with insulin or insulin secretagogues. When starting Bydureon while on other insulin products, it is recommended to decrease the dose of other glycemic control drugs to lessen the chance of becoming hypoglycemic. Patients should monitor for common signs of hypoglycemia, such as anxiety, palpitations, sweating, or confusion.

Although Byetta, another exenatide product, did not affect INR values in studies, there have been cases of exenatide elevating INR when used with warfarin. Some of these reports have resulted in bleeding. Bydureon has not been studied in combination with warfarin, however, caution should be taken if used concomitantly. Providers and patients should monitor INR more often after starting Bydureon. Patients should maintain a stable INR before continuing to monitor at normal, less frequent intervals usually used for warfarin.

Bydureon reduces the rate of gastric emptying, potentially causing Bydureon to slow the absorption rate of other oral drugs. Providers should take caution when patients are taking oral medications concomitantly with Bydureon, as a decreased oral absorption rate may reduce clinical effectiveness of important medications.

How do I take Bydureon?

Bydureon should be taken once weekly at any time of day, as long as it is the same time each week. Bydureon should be injected under the skin into the stomach, upper arm, or thigh. You should change the place you inject Bydureon every week. Do not inject into the same site. Bydureon has to be delivered immediately after suspending the powder in the diluent. The mixture should look cloudy, and there should be no dry powder present in the vial.

If you miss a dose of Bydureon, you should take the missed dose as soon as you remember, as long as there are at least 3 days left until the next anticipated dose. If the next dose will be in less than 3 days, you should skip the missed dose. The next dose should be taken as originally scheduled. Do not administer 2 doses within 3 days of each other.

Should Bydureon be taken long term?

Do I need to take Bydureon with food?

Bydureon can be taken with or without food.

If you overdose with Bydureon, you should immediately go to the emergency room or contact the Poison Control Center. Overdosing on Bydureon increases an individual’s chance of developing hypoglycemia or GI symptoms.

You should stop all other exenatide products prior to taking Bydureon, such as Byetta.

What side effects may occur when taking Bydureon?

What is important to tell my doctor before I take Bydureon?

It is important that you tell your doctor all of the medications, vitamins, and supplements that you take, especially if you are taking:

How and where should I store Bydureon?

Bydureon should be kept in the refrigerator between 36°F and 46°F (2°C and 8°C). Bydureon can be left out at room temperature for up to 4 weeks. Protect Bydureon from light and do not use if it has been frozen. Keep Bydureon out of reach from children.