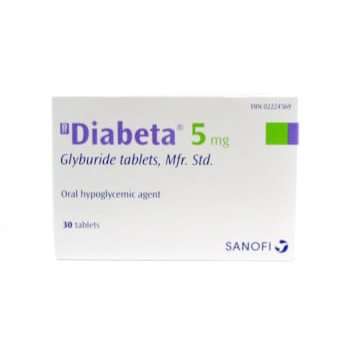 Diabeta, also known as glyburide, is a daily oral prescription medication. It is used in adults with type 2 diabetes mellitus (T2DM) to better glycemic control in addition to diet and exercise. Controlling hyperglycemia with Diabeta prevents downstream complications such as kidney damage, limb loss, heart attack, blindness, stroke, or nerve problems. It is important that diabetes remains controlled to lessen the chance of related complications. Diabeta is provided as tablets in 1.25 mg, 2.5 mg, and 5 mg strengths. Diabeta is not indicated for those with type 1 diabetes mellitus (T1DM)

HOW DOES DIABETA WORK?

Common side effects associated with Diabeta include:

Serious side effects include:

There are no studies that have evaluated the macrovascular risk with Diabeta use.

The sulfonylurea class of medications has been shown to cause severe hypoglycemia. It is important to consider the patient, dose, and instructions to prevent hypoglycemia. If a patient has renal or hepatic impairment, they may have increased concentrations of Diabeta in the blood. Additionally, pituitary and adrenal insufficiency can also increase one’s risk of developing hypoglycemia with glycemic control agents. Hypoglycemia symptoms may be masked in those with autonomic neuropathy, geriatrics, and those taking beta blockers. Individuals are at a greater risk of hypoglycemia when they are in a calorie deficit, undergo strenuous exercise, drink alcohol, or take more than one drug affecting glucose.

If a patient’s blood glucose is well-controlled but they experience external stress such as surgery, infection, trauma, or fever, their glucose levels may become uncontrolled. In these circumstances, Diabeta should be discontinued, and insulin should be administered.

Hypoglycemic agents, like Diabeta, may decrease in effectiveness after prolonged treatment. This may be due to disease progression or lessened response to the medication. This circumstance is known as secondary failure. It is different than primary failure, which refers to drug failure upon initial trial of the medication.

Hypoglycemia with Concomitant Use of Certain Drugs

Other drugs may potentiate the hypoglycemic effects of sulfonylureas such as Diabeta. These drugs include nonsteroidal anti-inflammatory agents (NSAIDs), disopyramide, ACE inhibitors, fluoxetine, salicylates, clarithromycin, sulfonamides, chloramphenicol, monoamine oxidase inhibitors (MAOIs), probenecid, and beta-adrenergic blocking agents. If patients are taking Diabeta and one or more of these agents, patients should be monitored for signs and symptoms of hypoglycemia. If one of these drugs is discontinued, the patient should be monitored for uncontrolled glucose levels.

Coadministration of glyburide with bosentan has caused elevations in liver enzymes. Therefore, Diabeta and bosentan should not be administered together.

Oral miconazole and oral antidiabetic agents have been reported to cause severe hypoglycemia. It is not known if this phenomenon can also occur with other miconazole routes of administration, such as intravenous, topical, or vaginal.

Glyburide may interact with fluoroquinolone antibiotics causing increased hypoglycemic action of glyburide. The mechanism underlying this phenomenon is not well understood.

Glyburide may interact with coumarin causing lessened effects of the coumarin derivatives. The mechanism underlying this phenomenon is not well understood.

CY2C9 and CYP3A4 Inducers and Inhibitors

CY2C9 and CYP3A4 inducers, such as rifampin, may cause a loss of glucose control when used with Diabeta. Additionally, co-administration of Diabeta with CYP2C9 and CYP3A4 inhibitors can also cause an interaction.

Concomitant use of colesevelam and Diabeta caused decreases in glyburide concentrations. Glyburide should be taken at least four hours before colesevelam.

Diabeta can cause elevations in cyclosporine concentrations leading to toxicity. Patients should be monitored and doses potentially adjusted if both drugs are to be taken by the patient.

Medications that can cause hyperglycemia may lead to uncontrolled glucose levels when taken with Diabeta. If these agents are taken with Diabeta, patient blood glucose levels should be monitored. If these medications are discontinued while on Diabeta, the patient should be monitored for signs and symptoms of hypoglycemia. These drugs include diuretics, phenothiazines, corticosteroids, thyroid medications, estrogens, phenytoin, oral contraceptives, nicotinic acid, calcium channel blocking drugs, isoniazid, and sympathomimetics.

It is not known if Diabeta is excreted into human milk. However, certain sulfonylureas have been shown to be excreted into human milk. Nursing infants are at risk for hypoglycemia, and therefore the benefits and risks of treatment should be weighed. If Diabeta is stopped and diet alone cannot control glucose levels, providers should consider initiating insulin therapy.

Diabeta has not been studied in pediatrics. Thus, efficacy and safety has not been established in younger patients.

In clinical trials, there was no difference in safety or effectiveness between younger patients and patients older than 65 years of age. However, increased sensitivity in geriatric patients cannot be discounted. Geriatric patients also have an increased incidence of renal insufficiency, and therefore renal function should be monitored during therapy.

How do I take Diabeta?

Diabeta should usually be started between 2.5 to 5 mg daily with the first meal of the day. Individuals who are more sensitive to glucose-lowering drugs should be initiated at 1.25 mg daily. The typical maintenance dose should be between 1.25 to 20 mg each day. This total dose can be given as a single dose or in divided doses. Some patients may respond better to a twice daily regimen. Titration should be done in increments of up to 2.5 mg weekly, depending on how glucose levels respond to therapy. The maximum daily dose is 20 mg.

What is important to know about Diabeta?

You should understand the potential risks and benefits associated with Diabeta therapy. It is important that while on Diabeta you also adhere to a proper diet and exercise regimen to maximize the effects of Diabeta. You should also be aware of the signs and symptoms of low blood sugar, including:

Ensure that your caregivers, friends, and family are also aware of the symptoms of low blood sugar. A blood sugar-lowering agent such as Diabeta can put you at risk for a serious reaction if not treated appropriately.

If you miss a dose of Diabeta, take it as soon as you remember. Never take more than two doses of Diabeta at once.

Should Diabeta be taken long term?

Diabeta can be taken long-term to control type 2 diabetes mellitus.

Do I need to take Diabeta with food?

Diabeta should be taken at least once daily with the first meal of the day.

If you overdose with Diabeta, you should immediately go to the emergency room or contact the Poison Control Center. If consciousness loss or neurologic findings are present, providers should administer oral glucose and closely monitor the patient. Severe hypoglycemic episodes will require immediate hospitalization.