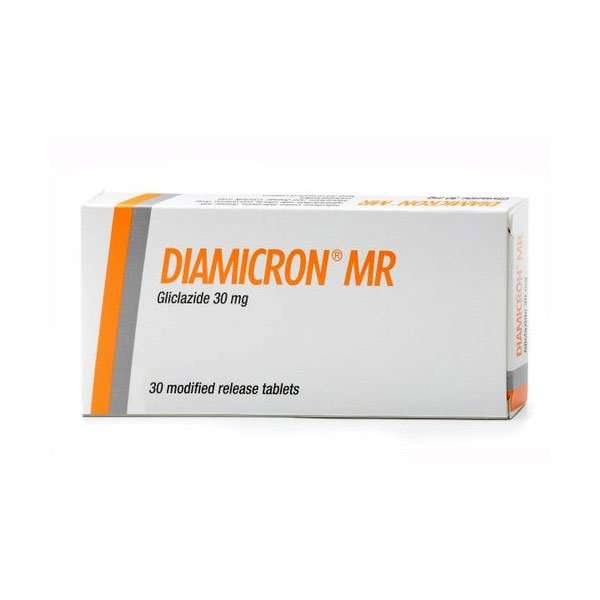 A medication that contains the active ingredient Gliclazide. It is used as a treatment for Type 2 Diabetes Mellitus – a disease that is also known as Non-Insulin Dependent Diabetes. When you have Type 2 Diabetes Mellitus, your body is not producing enough insulin and/or resistant to insulin, which makes it hard for the cells to respond to the normal mechanism of glucose shooting up. Gliclazide (Diamicron) on the other hand, keeps sugar levels normal and prevents complications like kidney damage and visual impairment. This medication can either be used alone or in combination with other hypoglycemic agents.

How does it work?

Gliclazide (Diamicron) is categorized under the therapeutic class of Sulfonylureas that work by stimulating the release of insulin in the pancreas to control excess blood glucose in the body.

Store this medication in a cool and dry place. Specifically, temperatures between 15-30 degrees Celsius (59-86 °F), away from heat, exposure to light, and moisture. Keep this medication out of reach of children and pets. Once a blister pack is opened, take it immediately or keep it in a vacuum-sealed container if you’re going to save it for later.

Dosages available in the market:

When is Diamicron Used? How is it Used?

Gliclazide (Diamicron) tablet is used when blood glucose levels cannot be controlled with diet and lifestyle modification alone. Diamicron is a sulfonylurea and since its mechanism is to lower blood glucose (sugar) levels in the body by insulin stimulation, the best time to take the medication is at least 30 minutes before a meal or after meals in the morning to prevent hypoglycemia. Hypoglycemia is a condition where blood sugar levels go below the normal and symptoms such as irregular heartbeat, fatigue, pale skin, tremors, and extreme hunger rise.

Taking Diamicron tablets depend on the patient’s blood glucose level. The initial dose of Gliclazide (Diamicron) tablets start with 40-80mg per day then slowly increased to 320mg if there is a need. Doses above 160 mg are taken in 2 divided doses.

For Modified Release tablets, initially, a single dose of 30mg daily and will increase up to 120mg if necessary.

In case a dose is missed, skip the missed dose and continue with your regular regimen. Never take double doses of Gliclazide to make up for the missed one. If you’re unsure on what to do, call your pharmacist or physician on possible interventions they might add.

If experienced, contact your physician immediately to intervene or change the course of therapy.

The main mechanism of Gliclazide (Diamicron) is to lower blood sugar. This could result to arrhythmias, fatigue, pale skin, tremors, and extreme hunger.

How to Avoid Hypoglycemia:

Gliclazide (Diamicron) is under Pregnancy Category C where it had shown adverse effects on the fetus and there are no sufficient and well-controlled studies in humans yet. Therefore, Diamicron is generally not recommended to be taken while pregnant and breastfeeding because it could also affect the baby’s health.

Medications that cannot be taken while on Gliclazide (Diamicron) and could lead hypoglycemic shock:

Medications taken in conjunction with Gliclazide (Diamicron) that can antagonize its effect by increasing blood sugar levels instead of controlling it:

Medications that should be avoided in general to avoid further complications:

Gliclazide (Diamicron) is contraindicated in the following:

Who should not take gliclazide?

Does Diamicron have to be taken with food?

Yes, because it might leave you nauseated and weak due to its hypoglycemic effect.

How long does it take for Diamicron to lower blood sugar?

The effects of Diamicron would take about 30 minutes to 1 hour after consumption. For better effects, take Diamicron least 30 minutes before a meal. Just make sure to eat a meal with carbohydrates to prevent hypoglycemia.

Diamicron can cause High Blood Pressure. Make sure to check with your physician first before taking the medication.

Can Diamicron be given at night?

What is the half-life of Diamicron?