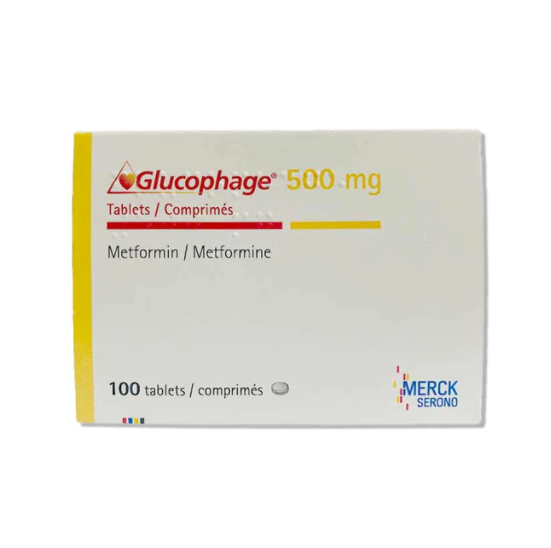 Glucophage is a biguanide that contains metformin hydrochloride. It is a prescription medication used in addition to diet and exercise to improve glucose control in adults with type II diabetes mellitus (T2DM). Controlling hyperglycemia prevents downstream complications such as kidney damage, loss of limbs, blindness, heart attack, stroke, or nerve problems. It is important that diabetes remains controlled to lessen the chance of related complications. Glucophage is not recommended for the treatment of type I diabetes or for patients with diabetic ketoacidosis.

HOW DOES GLUCOPHAGE WORK?

Glucophage is an antidiabetic agent that works by decreasing basal and postprandial plasma glucose. Metformin lessens absorption of glucose in the intestine, lowers hepatic production of glucose, and increases insulin sensitivity by elevating peripheral glucose utilization. Metformin’s exact mechanism is not well understood, but a few methods have been postulated. These include inhibiting mitochondrial complex I activity, stimulating AMP-activated protein kinase (AMPK), inhibition of glucagon-induced increases in cyclic adenosine monophosphate (cAMP), decreasing activation of protein kinase A (PKA), and affecting gut microbiota. With Glucophage, insulin secretion does not change, however, all-day plasma insulin response and fasting insulin levels can decrease.

Renal impairment – In post-marketing cases, lactic acidosis caused by metformin mostly occurred in patients that had significant renal impairment. Do not use in patients with an eGFR of less than 45 mL/min/1.73 m2. Monitor eGFR annually in patients taking Glucophage. Those at greater risk for developing renal dysfunction, such as the elderly, institute more frequent monitoring of renal function.

Age 65 or greater – Older patients are at a higher risk for developing renal impairment. Therefore, renal function should be assessed more often in the elderly who are on Glucophage.

Alcohol – Avoid excessive alcohol intake, as alcohol increases the effects of metformin on metabolism of lactate. Warn patients of the dangers of drinking large amounts of alcohol while on Glucophage.

Studies have shown a decrease in vitamin B12 levels with the use of metformin. Monitor hematologic measures annually and vitamin B12 parameters every 2 to 3 years for patients taking Glucophage. If abnormalities are present, manage appropriately with Glucophage discontinuation or vitamin B12 supplementation.

Glucophage can cause hypoglycemia when used in combination with other products that lower blood glucose, such as insulin. Dose adjustments to insulin may be required to prevent the development of hypoglycemia.

The decreased macrovascular risk with Glucophage has not been proven in any clinical studies.

Carbonic anhydrase inhibitors can lower serum bicarbonate and cause non-anion gap metabolic acidosis. When used concomitantly with Glucophage, this combination can elevate an individual’s risk for developing lactic acidosis. Patients that are taking these drugs in combination should be frequently monitored. Examples of CAIs include topiramate and acetazolamide.

When used in combination with other drugs that can cause hypoglycemia, the risk for developing hypoglycemia with Glucophage is increased. Patients should be monitored for signs of hypoglycemia when on concomitant glucose-altering agents such as steroids, diuretics, and phenytoin.

How should I take Glucophage?

The dose of Glucophage will be different for different patients. Take Glucophage exactly as your doctor tells you to take it. Typically, Glucophage is taken once daily by mouth. Swallow tablets whole and never crush, chew, or cut tablets.

Should Glucophage be taken long term?

Do I need to take Glucophage with food?

Glucophage should be taken with meals, preferably with an evening meal. This helps to decrease potential stomach or bowel side effects that may occur after initiating Glucophage.

If you take too much Glucophage, you should immediately go to the emergency room or contact the Poison Control Center.

Avoid excessive alcohol intake, as this increases one’s risk of developing lactic acidosis while on Glucophage. Do not binge drink in short periods, and you should not drink a lot of alcohol on a normal basis.

What side effects may occur when taking Glucophage

Common side effects of Glucophage include:

Serious side effects of Glucophage include lactic acidosis. Contact your provider immediately if you have signs and symptoms of lactic acidosis, such as:

What is important to tell my doctor before I take Glucophage?

Can Glucophage be used in children?

How and where should I store Glucophage?

Store Glucophage at room temperature between 68°F to 77°F (20°C to 25°C). Glucophage should be kept out of reach from children. Do not hold on to expired medicine or medicine that you no longer need. Ask your doctor how you should dispose of any Glucophage you do not use.