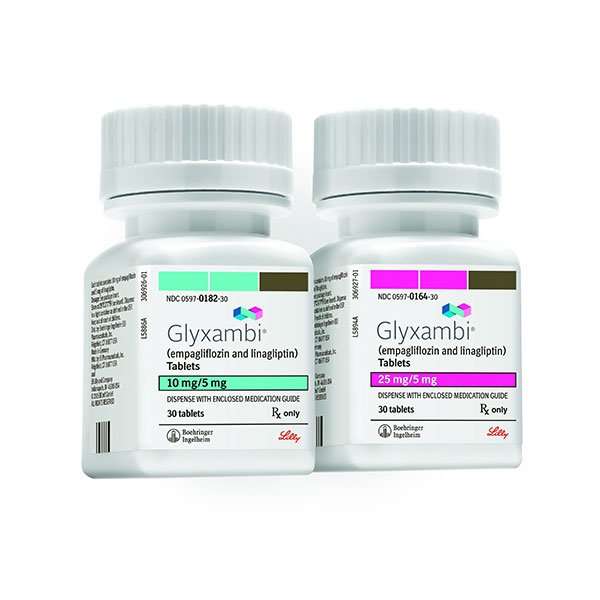 Glyxambi (empagliflozin and linagliptin) is a tablet that is taken orally in patients with type 2 diabetes mellitus to improve their blood sugar control. It is used in conjunction with diet and exercise.

Glyxambi is a combination tablet. It contains empagliflozin, a sodium-glucose co-transporter (SGLT2) inhibitor and linagliptin, a dipeptidyl peptidase-4 (DPP-4) inhibitor. Empagliflozin reduces the amount of glucose that is reabsorbed from the kidneys and so lowers blood glucose concentrations in the blood. Linagliptin prevents the breakdown of incretin hormones. Incretin hormones increase the secretion of insulin and decrease the concentration of glucagon. By inhibiting the breakdown of incretin, there is a reduction in blood glucose levels in the blood.

WHAT ARE THE INDICATIONS FOR GLYXAMBI?

Glyxambi is indicated for the management of patients with type 2 diabetes mellitus. It is used in combination with diet and exercise to improve blood glucose concentrations.

WHAT IS THE DOSE OF GLYXAMBI?

Glyxambi has been reported to cause acute pancreatitis. This seems to be caused by linagliptin. Patients should be carefully monitored for this complication. If pancreatitis is diagnosed, Glyxambi should be stopped immediately.

Glyxambi causes an increase in serum creatinine. This is mediated by empagliflozin. It occurs more commonly in elderly patients and those with preexisting renal dysfunction.

Glyxambi, when used together with insulin or drugs that stimulate the secretion of insulin, can cause low blood sugar (hypoglycemia). A lower dose of insulin or insulin secretion stimulators should be used when used in combination with Glyxambi.

Glyxambi increases the risk of developing fungal infections on the genitals.

Glyxambi increases the risk of developing infections in the urinary tract.

There have been reports of severe hypersensitivity reactions in patients taking Glyxambi. These generally occur within three months of starting treatment.

Glyxambi has not been studied well in pregnant women. Evidence suggests that Glyxambi does not affect the fetus. Its use in pregnancy should only be considered if the benefits outweigh the potential fetal risk.

Glyxambi is excreted in breast milk. Only use Glyxambi if the benefits to the mother outweigh the possible risk to the infant.

The safety of Glyxambi in pediatric patients under the age of 18 has not been established.

When used in patients 75 years or older, there is an increased incidence of osmotic diuresis. This increases the risk of hypotension and renal failure.

Glyxambi can be safely used in patients with hepatic impairment.

Patients with any of the following should not be put on Glyxambi therapy:

Common side effects of Glyxambi include:

Certain drugs may interact with Glyxambi. These include:

In what form is Glyxambi manufactured?

What is the dose of Glyxambi?

How should I take Glyxambi?

Glyxambi should be taken as instructed by your doctor. Take one tablet each day in the morning. You can take this with or without food. If you take insulin at the same time as Glyxambi, your doctor will adjust the dose of the insulin. Check your blood sugar as your doctor instructs you to. Should you be undergoing a period of physical stress due to an infection or a fever, your dose of Glyxambi may need to be adjusted. Your doctor should be consulted on these events.

Who should not take Glyxambi?

What should I do if I miss a dose of Glyxambi?

Should you miss a dose of Glyxambi, take your medication as soon as you remember. If you are due to take your next dose, skip the dose you have missed and return to your normal schedule. Never take two doses ofGlyxambi at the same time.

When should not take Glyxambi?

You should not use Glyxambi if you have:

What side effects can I experience when taking Glyxambi?

Common side effects of Glyxambi include:

What should I do if I experience severe side effects when taking Glyxambi?

If you experience severe side effects, immediately contact your doctor or go to the nearest emergency health care facility.

How should Glyxambi be stored?

Your Glyxambi should be stored at room temperature between 20° C to 25° C and protected from light. It should be kept away from children