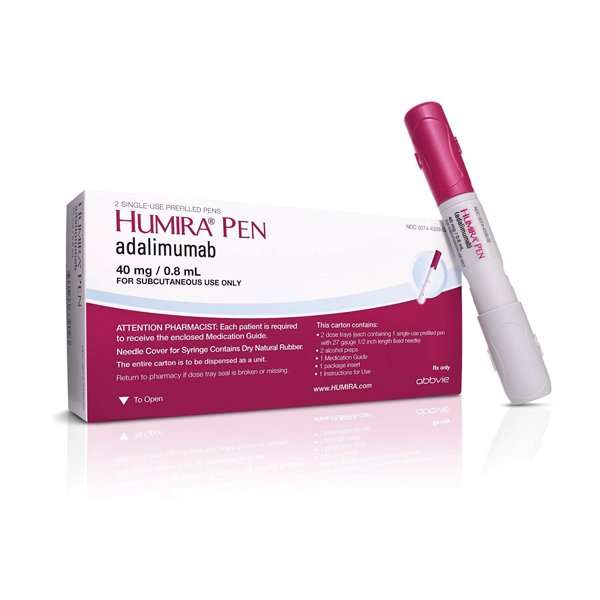 What is Humira (adalimumab)?

Humira is an brand-name medication that acts as a TNF blocker which lowers your immune systems ability to fight infections.

The Food and Drug Administration (FDA) have approved biosimilar versions (biosimilars are similar or exact copies of a brand-name drug) of Humira such as: Abrilada, Amjevita, Cyltezo, Hadlima and Hyrimoz.

The active drug in Humira is called adalimumab.

Humira is taken as an injection and available as a pre-filled pen.

Your doctor or pharmacist should provide instructions on how to properly administer the medication. It should also include an information packet with further instructions and information.

Humira must be kept cold and stored in the refrigerator. It is delivered in an insulated container to maintain its integrity.

Keep it in its original packaging until ready for use.

Do not freeze or ever use if it was previously frozen.

Keep medication away from direct sunlight.

When ready to use, take out of refrigerator and let naturally warm up. Do not try to warm it up faster.

When travelling or when not able to keep medication cold, Humira can be stored at room temperature (up to 77 degrees) for up to 2 weeks. Humira can be kept unrefrigerated for up to 14 days. If it exceeds 2 weeks or this temperature, d no not use.

When disposing of medication, do not flush down wastewater (i.e. toilet or sink) or put in household trash. Discard this medication according to your pharmacists instructions when expired or no loner needed.

Humira can lead to mild or serious side effects. The following information below provides side effects that may occur when taking Humira but not limited to all possible side effects.

Consult your doctor and pharmacist for more information on the possible side effects associated with Humira.

Mild side effects experienced by patients using Humira include:

Most side effects are known to go away within a few days or weeks. If they don’t go away or worse, consult your physician.

If you experience serious side effects related to takin Humira, consult your doctor immediately. If you feel the symptoms are life threatening seek medical emergency by calling 911.

Serious side effects experienced by patients taking Humira include:

Nerve disorders or demyelinating diseases, such as multiple sclerosis (MS) or seizures.

For those taking other medications along with Humira, it is unknown how often allergic reactions occurred.

Symptoms of allergic reactions may include:

It’s possible but rare for severe allergic reactions when taking Humira. However, it’s not known how often these have occurred during clinical trials.

Symptoms of a severe allergic reaction may include:

Contact a doctor immediately if you feel you are experiencing a severe allergic reaction. If you feel symptoms are life-threatening you should seek medical emergency or call 911.

Long-term side effects can occur for patients using Humira. These can include the growth of tumors or the development of cancer such as Lymphoma.

Consult your doctor if you have any concerns about the long-term side effects associated with Humira.

7% of patients stop taking Humira due to injection site reactions. In most cases, the reactions are mild and don’t impact a patients daily life.

Symptoms of injections site reactions may include: swelling, redness, itching, pain or bleeding.

In clinical studies, weight gain wasn’t reported. Weight gain has been reported when used with medications such as TNF (tumor necrosis factor) blockers.

Cancer (such as lymphoma)

Humira includes a black box warning on the packaging as the medication has been known to increase the risk of cancer such as lymphoma. Humira, like other TNF blockers, have been linked to an increased risk of cancer.

Adults taking Humira in a clinical study found that people were 3 times more likely to develop lymphoma than those in the US who didn’t take the drug.

Hepatosplenic T-cell lymphoma is a rare form of lymphoma which as been reported in children and young adult men, however in most cases they had ulcerative colitis (UC) or Crohn’s disease (CD).

Aside from lymphoma, nonmelanoma is the second most commonly type of cancer followed by breast cancer, colon cancer, prostate cancer, and lung cancer.

Whether Humira causes cancer is still unknown and there has been conflicting results from studies on whether TNF blockers increase the risk of developing cancer.

Some conditions Humira is used to treat, such as rheumatoid arthritis, are linked with a higher risk of developing lymphoma.

Symptoms of lymphoma may include:

If you are concerned with the risks associated with taking Humira, speak with your doctor. They can help determine the risk vs benefits of taking this medication or whether they may need to recommend another drug.

During the clinical trials, hair loss was not reported as a side effect of Humira. However, there have been reports from patients taking Humira after it was released into the market.

Since the reports were released after Humira’s clinical studies, it’s not conclusive whether it plays a role in hair loss.

Consult your doctor if you are concerned about hair loss while taking Humira.

Skin rashes are one of the most common side effects when taking Humira.

Most cases of skin rashes were mild and eventually went away. Across all studies 0.3% of people stopped taking Humira due to the rashes.

Inform your doctor if you’ve developed a rash while taking Humira as they may provide additional guidance to treat rashes and ease discomfort.

Humira has a black box warning regarding the increased risk of serious infections such as pneumonia or tuberculosis (TB). Since Humira may weaken the immune system it can make patients more susceptible to fight off infections.

In clinical studies involving all uses of Humira, people had serious infections caused by fungi, viruses and bacteria. It was found that those who took Humira had higher rates of infection than those who took the placebo. Some people experienced severe infections which required hospitalization and even death.

Symptoms of serious infections such as tuberculosis include:

Notify your doctor immediately if you notice you are experiencing any of these symptoms while taking Humira. Your doctor may choose to pause treatment if they discover a serious infection.

During treatment a doctor should test you for existing infections and check for close signs of TB. If you doctor knows you have TB they may provide you with medication to treat it.

A rare type of cancer called heptosplenic T-cell lymphoma has been reported in rare cases that can be fatal.

Humira or TNF blockers may increase chances of developing 2 types of skin cancers called basal cell and squamous cell. These are generally not fatal provided they are treated early. Inform your doctor if you have any open sources or bumps that do not heal.

The Food and Drug Administration tracks side effects on approved drugs.

Before using Humira, inform your doctor if you have any allergies. This medication may contain ingredients such as latex or natural rubber that may trigger an allergic reaction. Consult your pharmacist as well.

Before starting Humira, inform your doctor of your medical history such as recent/current/repeated infections such as TB infection, histoplasmosis or hepatitis B; blood bone marry problems (such as low white/red blood cells or platelets), certain brain/nerve disorders (such as MS, Guillain-Barre syndrome), heart disease, cancer or lupus.

Wash your hands thoroughly to prevent the spread of infections. Humira may increase your chances of getting infections or worsening infections. Inform your doctor if you have been exposed to an infection and avoid contact with people with measles, chickenpox or have the flu.

Consult your doctor if you are looking to get any vaccinations or immunizations and avoid people have recently received vaccinations.

Be attentive when using sharp objects such as razors and nail cutters to avoid getting cut, bruised or injured. Avoid contact sports.

Inform your doctor about all medications you are currently taking including over-the-counter drugs, herbal supplements and other prescription medications.

Let your doctor know if you are planning on getting pregnant or pregnant if you are using or planning to use Humira. Humira should only be used if clearly needed during pregnancy. Speak to your doctor about the risks and benefits about taking Humira.

Since this medication passes through breast milk you should consult your doctor before breast-feeding.

Older adults are at an increased risk of infections while using this medication.

Some medications may change the effectiveness or increase the risk of side effects.

The content on this page does not contain all possible drug interactions.

Share information with your doctor on all prescription and non-prescription medications, herbal supplements and vitamins.

Do not start, stop or adjust your dosage without your doctors approval.

Some drugs that may interact with Humira include:

Known drugs that may cause problems when used together with Humira are:

What should you tell your doctor before using Humira?

Your doctor should be informed of any existing health conditions including:

Let your doctor know if you are taking any other medications. Humira should not be taken if you are currently taking:

Inform your doctor if you have ever taken: