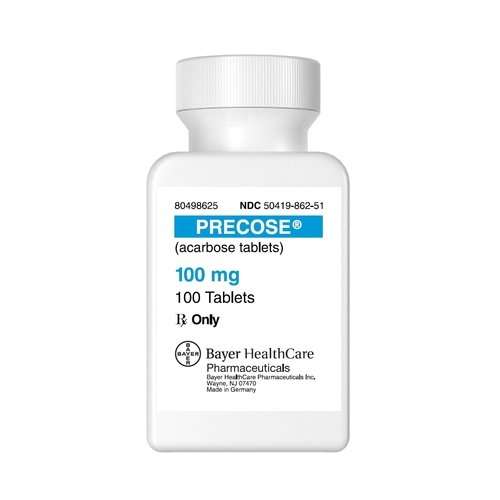 Precose, also known as acarbose, is an oral alpha-glucosidase inhibitor used for the treatment of type 2 diabetes mellitus in addition to diet and exercise. Controlling hyperglycemia prevents downstream complications such as kidney damage, loss of limbs, blindness, heart attack, stroke, or nerve problems. Cardiovascular and renal events in diabetes can also be detrimental. It is important that diabetes and related events remain controlled to lessen the chance of related complications. Precose is not indicated for the treatment of type 1 diabetes.

HOW DOES PRECOSE WORK?

Precose is a complex oligosaccharide. It delays the breakdown of carbohydrates from food, causing a lessened rise in glucose levels after meals. Because blood glucose concentrations are decreased, Precose decreases glycosylated hemoglobin levels. Glycosylation of hemoglobin represents the average concentration of blood glucose over time.

Precose does not increase insulin release as sulfonylureas do. Precose competitively and reversibly inhibits alpha-amylase and alpha-glucosidase hydrolase enzymes in the pancreas. Alpha amylase in the pancreas is responsible for breaking down starches into oligosaccharides in the small intestine. Alpha-glucosidases break down oligosaccharides, trisaccharides, and disaccharides to glucose also in the small intestine. By blocking this enzyme, Precose delays the absorption of glucose, thus decreasing hyperglycemia after ingesting meals.

The mechanism of Precose differs from sulfonylureas. Therefore, Precose can be used in combination with sulfonylureas, insulin, and metformin to potentiate glycemic effects. Precose also lessens the effects of sulfonylureas with respect to insulinotropic activity and weight gain. Additionally, Precose dos does not cause lactose intolerance because it has no effect on lactase.

More serious side effects include:

There are no studies that have evaluated the macrovascular risk with Precose use.

In cases of mild to moderate hypoglycemia, oral glucose should be administered. Absorption of oral glucose, or dextrose, is not affected by Precose, making it a good agent to treat low glucose levels. Sucrose, or cane sugar, should not be used as Precose blocks the breakdown of sucrose into glucose and fructose. Therefore, it does not quickly reverse symptoms of hypoglycemia. Serious hypoglycemia should be treated with an infusion of intravenous glucose or a glucagon injection.

Cases of increased transaminases were not serious as they were asymptomatic and reversible. They were typically not associated with liver impairment. Incidence was higher in females. AST and ALT elevations were seemingly dose related. Particularly, in doses up to 100 mg three times daily, incidence of transaminase elevations was similar between patients treated with Precose versus patients treated with placebo.

Throughout post marketing experience, Precose has been associated with 62 cases of transaminase elevations greater than 500 IU/L. A total of 29 cases also involved jaundice symptoms. Of these cases, 41 were receiving at least 100 mg of Precose three times daily. Of 45 patients whose weight was documented, 33 patients weighed less than 60 kg. In the 59 reports where follow-up was documented, liver dysfunction resolved upon stopping Precose in 55 patients.  In a total of two cases enzyme levels remained unchanged. Additionally, reports of fatal fulminant hepatitis have occurred. However, it is unknown if these incidences involved acarbose.

If a patient’s blood glucose is well-controlled but they experience external stress such as surgery, infection, trauma, or fever, their glucose levels may become uncontrolled. In these circumstances, Precose should be discontinued, and insulin should be administered.

Medications that can cause hyperglycemia may lead to uncontrolled glucose levels when taken with Precose. If these agents are taken with Precose, patient blood glucose levels should be monitored. If these medications are discontinued while on Precose, the patient should be monitored for signs and symptoms of hypoglycemia. These drugs include diuretics, phenothiazines, corticosteroids, thyroid medications, estrogens, phenytoin, oral contraceptives, nicotinic acid, calcium channel blocking drugs, isoniazid, and sympathomimetics.

Certain intestinal adsorbents and digestive enzyme preparations may decrease Precose efficacy. Intestinal adsorbents include things like charcoal. Digestive enzyme preparations that have carbohydrate-splitting enzymes are also of concern and include amylase or pancreatin. Therefore, these substances are not recommended to be taken together with Precose.

When co-administered with digoxin, Precose has been shown to change digoxin bioavailability and thus digoxin concentrations. Use caution when taking concomitantly and monitor appropriately to avoid digoxin toxicity. Additionally, digoxin may require a change in dose if taken together with Precose.

It is not known if Precose is safe in pregnant women. Animal studies in rats received Precose doses of up to 480 mg/kg and did not demonstrate injury to fertility or the fetus. In rabbits, there were slightly more embryonic losses in rabbits treated with Precose. However, this is likely due to a decrease in weight gain in pregnant rabbits. Additionally, rabbits receiving 160 mg/kg of Precose did not demonstrate embryotoxicity or teratogenicity. However, no well-controlled studies exist evaluating Precose during pregnancy in humans. Animal studies do not always predict adverse effects in humans, and therefore providers should proceed with caution when using Precose during pregnancy. Uncontrolled blood glucose during pregnancy can lead to congenital problems and neonatal morbidity and mortality. Thus, the benefits and risks of initiating Precose in diabetic, pregnant patients should be considered. Insulin is most commonly used, though, in treating diabetes during pregnancy.

Studies evaluated the presence of Precose in animal milk. After administration of radiolabeled acarbose, lactating rats had trace amounts of radioactivity in their milk. This suggests that Precose may be excreted into human milk. Thus, Precose should not be taken by lactating patients.

Precose has not been studied in pediatric patients. Thus, safety and effectiveness in younger populations have not been confirmed.

Of all the participants included in Precose clinical studies, 27% of them were over the age of 65 years of age. A total of 4% were over the age of 75. In general, there were no differences between older and younger subjects in terms of safety and effectiveness. Precose concentrations were 1.5 times higher in geriatric patients versus younger patients. However, the variance in concentration was not statistically significant.

How should I take Precose?

Should Precose be taken long term?

Do I need to take Precose with food?

Precose should be taken with the first bite of each meal, usually three times daily with each meal.

If you overdose with Precose, you should immediately go to the emergency room or contact the Poison Control Center.

Avoid excessive alcohol intake, as alcohol can lower your blood sugar. Also do not take digestive enzymes like amylase, lipase, or pancreatin at the same exact time as Precose. These enzymes are sold as Arco-Lase, Cotazym, Pancreas, Creon, Donnazyme, and Ku-Zyme. These substances can make it difficult to absorb Precose.

What side effects may occur when taking Precose

Common side effects may include:

More serious side effects may include: