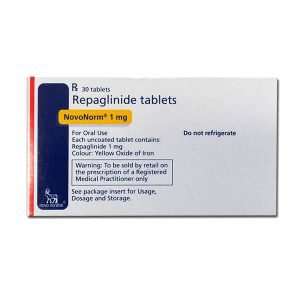 Repaglinide is an antidiabetic drug belonging to the meglitinide class. It is used in adjunct to diet and exercise for the treatment of type 2 diabetes mellitus (T2DM), specifically in those who are non-insulin dependent. It works by lowering blood glucose and preventing hyperglycemia. Controlling hyperglycemia prevents downstream complications such as kidney damage, loss of limbs, blindness, heart attack, stroke, or nerve problems. It is important to keep control over diabetes to decrease the chance of experiencing related complications. Repaglinide should not be used in those with type 1 diabetes mellitus (T1DM).

HOW DOES REPAGLINIDE WORK?

Repaglinide works by decreasing blood glucose levels in the blood. Repaglinide exerts this effect by initiating insulin production in the pancreas. This mechanism requires functioning (ß) cells in the pancreatic islets, and therefore repaglinide does not work in patients with T1DM. The production of insulin depends on glucose and results in decreased concentrations of glucose.

Repaglinide shuts ATP-dependent potassium channels within the membrane of ß-cells. Inhibition of these potassium channels depolarizes the ß-cell, causing calcium channels to open. Increased influx of calcium causes the release of insulin. This phenomenon is highly selective to ion channels in certain tissues, so skeletal and heart muscle are not affected.

As with all glucose-lowering drugs, repaglinide can cause hypoglycemia. To avoid hypoglycemia, use caution when initiating repaglinide, taking into account the patient, dose, and patient instructions. Specifically, those with hepatic, renal, adrenal, and pituitary insufficiency may have increased serum concentrations of repaglinide and are more likely to experience hypoglycemia. Additionally, patients who are elderly, debilitated, or malnourished may be more sensitive to hypoglycemic events. The elderly and those also on beta-blockers may have a more difficult time recognizing signs and symptoms of hypoglycemia. Hypoglycemia has a higher likelihood of occurring in the instance of extensive exercise, alcohol consumption, or when used with more than one glucose-lowering drug.

Decreased macrovascular risk with repaglinide or other antidiabetic drugs have not been proven in any clinical studies.

If a diabetic patient controlled on an antidiabetic regimen experiences stress such as fever, infection, surgery, or trauma, they are at increased likelihood of losing glucose control. In these situations, it may be best to stop repaglinide and use insulin instead. Additionally, drugs that lower blood glucose may lose effectiveness over time, which is known as secondary failure. Before determining the patient is experiencing secondary failure, ensure their dose is adjusted appropriately and that they are adhering to a proper diet.

Repaglinide did not elicit teratogenic effects in animal models, but these results are not always predictive of human response. Therefore, the safety of repaglinide is not fully established in pregnant women. However, uncontrolled glucose levels during pregnancy have been linked to congenital abnormalities. Therefore, only use repaglinide if truly needed, and consider insulin as an alternative.

It is not known if repaglinide is excreted into human milk during lactation. Because of the hypoglycemia potential to nursing infants, providers should consider discontinuing repaglinide. If stopped, patients should maintain an adequate diet and be started on insulin therapy if needed.

Repaglinide has not been evaluated in pediatric patients.

Older adults may have greater sensitivity to repaglinide. Use caution when initiating in geriatric patients.

How should I take repaglinide?

The dose of repaglinide will be different for different patients. Take Repaglinide exactly as your doctor tells you to take it. Typically, repaglinide is taken multiple times a day with meals. Take tablets within 30 minutes of a meal and swallow the tablet whole. Never crush, chew, or cut tablets.

How is repaglinide dosed?

Repaglinide is provided as 0.5, 2, and 4 mg tablets. You may be started on as low as 0.5 mg taken with each meal. The typical dose of repaglinide is 0.5 to 4 mg before each meal. The maximum total daily dose is 16 mg daily. Repaglinide should start working within 30 minutes, and effects will last for a few hours.

Take the missed dose as soon as you remember, but only take the dose if you are preparing to eat a meal. If you skip a meal, do not take a dose. Wait until the next meal to take a dose. Do not take more than one dose of repaglinide at once.

Should repaglinide be taken long term?

Do I need to take repaglinide with food?

Repaglinide should always be taken within 30 minutes of having a meal.

If you take too much repaglinide, you should immediately go to the emergency room or contact the Poison Control Center. Overdosing on repaglinide can cause life-threatening hypoglycemia. Symptoms of serious hypoglycemia include sweating, blurred vision, weakness, difficulty speaking, stomach pain, tremors, confusion, or seizures.

Avoid excessive alcohol intake, as this increases one’s risk for developing low blood sugar. Do not binge drink in short periods, and you should not drink a lot of alcohol on a normal basis.

What side effects may occur when taking repaglinide?

Common side effects of repaglinide include:

Contact your provider immediately if you have signs and symptoms of severe adverse effects, such as:

What is important to tell my doctor before I take repaglinide?

It is important that you tell your doctor all of the medications, vitamins, and supplements that you take. Maintain a medication list to give to your healthcare provider and pharm