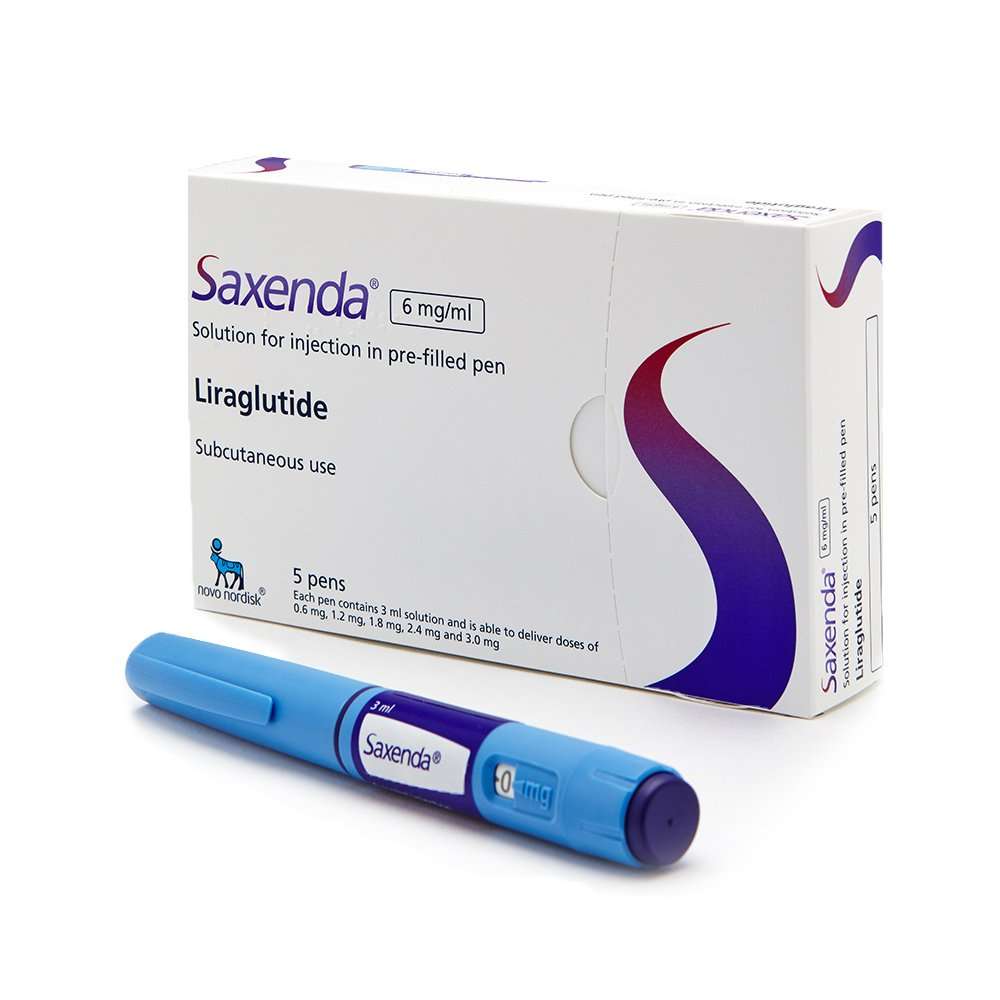 WHAT IS SAXENDA (liraglutide) ?

Saxenda, also known as liraglutide, is a daily injectable prescription medication. It is a glucagon-like peptide 1 (GLP-1) receptor agonist used for chronic weight management in addition to diet and exercise. Saxenda has proven efficacy and safety in those who are:

Saxenda has a few limitations to its use. These include:

HOW DOES SAXENDA WORK?

Common side effects of Saxenda include:

Saxenda has been shown to cause thyroid C-cell tumors in rats. Liraglutide has demonstrated medullary thyroid carcinoma (MTC) in post-marketing data; though causality cannot be determined at this time.

Currently, it is not known if Saxenda can induce thyroid C-cell tumors, but those with a history of MTC should avoid use of Saxenda. Patients should look out for MTC symptoms, such as a neck mass, dysphagia, hoarseness, or dyspnea. If these signs are present, patients should be evaluated for thyroid disease. Signs include if a patients serum calcitonin is markedly elevated or if a neck mass is present.

In studies, Saxenda has been shown to increase resting heart rate up to 2 to 3 beats per minute (bpm). Other patients demonstrated increases between 10 to 20 bpm, with at least one person having a heart rate over 100 bpm. Consequently, Saxenda is thought to cause tachycardia. A patient’s heart rate should be monitored routinely while on Saxenda. In patients who experience a fast heart rate at rest for a long period of time, Saxenda should be stopped.

Saxenda has been shown to cause acute renal failure or worsening of existing renal failure. Some cases have needed treatment with hemodialysis. Some cases occurred in those with known renal disease. Most cases were accompanied by symptoms of nausea, diarrhea, or vomiting, causing volume depletion. Certain cases included patients who were on other medications that can influence renal function and volume status. Most cases of renal impairment were reversed after discontinuing causative agents, such as Saxenda, and initiating supportive treatment. If a patient has renal impairment, providers should use caution when starting Saxenda or increasing the dose.

In clinical trials, 0.3% of patients on Saxenda experienced suicidal ideation compared to the 0.1% in the placebo group. One patient in the Saxenda arm attempted suicide. In pediatric studies, one patient (0.8%) died by suicide. It is currently unknown if there is a causal relationship between Saxenda and suicidal ideation. Patients should be monitored for new and worsening signs of depression and suicidal behavior. If patients exhibit these symptoms, Saxenda should be stopped. If patients have a history of depression or suicidal behavior, Saxenda should be avoided.

Saxenda reduces the rate of gastric emptying, potentially causing Saxenda to slow the absorption rate of other oral drugs. Providers should take caution when patients are taking oral medications concomitantly with Saxenda, as a decreased oral absorption rate may reduce clinical effectiveness of important medications.

How do I take Saxenda?

Your provider should demonstrate how you should use Saxenda before you administer it yourself. Take Saxenda exactly as your provider directs you to. Saxenda should be taken once daily at any time of day. Saxenda should be injected under the skin into the stomach, upper arm, or thigh. Do not inject Saxenda into the muscle or vein. You should change the place you inject Saxenda every day. Do not inject into the same site.

Saxenda should be started at 0.6 mg daily during the first week. Your Saxenda dose should be increased after one week of use to 1.2 mg daily. During the third week, you should take 1.8 mg daily and then 2.4 mg in your fourth week. Your dose should be increased until your reach a total of 3 mg per dose. Do not alter your dose unless you are instructed by your physician. Children can receive a lower dose of 2.4 mg daily if they do not tolerate the 3 mg dose.

Your physician should also have you on a concomitant diet and exercise plan. This program should continue while you take Saxenda.

Do I need to take Saxenda with food?

Saxenda can be taken with or without regard to food.

Should Saxenda be taken long term?

Saxenda can be taken long-term for weight management.

What happens if I overdose on Saxenda?

If you overdose with Saxenda, you should immediately go to the emergency room or contact the Poison Control Center. Overdosing on Saxenda increases an individual’s chance of developing low blood sugar, nausea, and vomiting.

What should I do if I miss a dose of Saxenda?

If you miss your dose of Saxenda, do not take an extra dose or increase your dose the next day. Simply administer your daily dose the next day as scheduled. If you forget to take Saxenda for more than three days, contact your physician to discuss how to restart Saxenda.

What side effects may occur when taking Saxenda?

Common side effects of Saxenda include:

More rare, serious side effects of Saxenda include:

What is important to tell my doctor before I take Saxenda?

It is important that you tell your doctor all of the medications, vitamins, and supplements that you take. Additionally, do not take Saxenda if you:

How and where should I store Saxenda?

Saxenda should be kept in the refrigerator between 36°F and 46°F (2°C and 8°C). After use, Saxenda can be left out at room temperature or in the refrigerator for up to 4 weeks. Protect Saxenda from light and do not use if it has been frozen. Keep Saxenda out of reach from children.

How should I dispose of Saxenda?

Before disposing of Saxenda, safely remove and discard the needle. This is an important step as needle contamination can cause infection and leakage. Throw away a used Saxenda pen after it has been opened for 30 days.