Walmart markets several of its’ own forms of insulin under the “ReliOn” brand name, which is much less expensive than other comparable insulins.  They did this by teaming up with 2 of the 3 major insulin producers – Lilly and Novo Nordisk. Walmart ReliOn human insulins, which include Humulin NPH, Humulin Regular, and Humulin 70/30 mix, were created by the collaborative efforts of Lilly and Walmart in 2010. These insulins cost less than $25.00 per vial. In 2018, Walmart developed a ReliOn Novolin insulin pen at a cost of $42.88 per box of 5 of 70/30 pens. 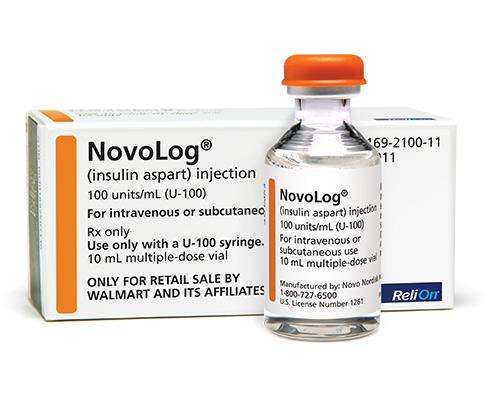 In 2021 Walmart collaborated with Novo Nordisk to create a fast-acting analog insulin “ReliOn Novolog.”  Novolog came out under the Walmart ReliOn brand with each vial of ReliOn NovoLog vial (10 mL) costing $72.88 and a box of five FlexPens (3 mL each, 15 mL per box) costing $85.88.  Walmart reports that its offering can save patients between 58 to 75%, which amounts to $101 per vial and $251 per package of branded Flex Pens1. By comparison, the cash list price for name brand Novolog is $289.36 for a 10mL vial and $559 for a box of five insulin pens.

This Walmart ReliOn Novolog insulin does not require a prescription but should not be used without the guidance of your healthcare team. They are designed for those individuals who must pay out of pocket because their health plans do not have prescription drug coverage or have a high deductible.   When you go to Walmart you won’t find it sitting on the counter next to the Tylenol either; you need to inquire of the pharmacist to purchase it. It is still a medication managed very carefully by the pharmacist and needs to be refrigerated.  The ReliOn brand analog however does require a prescription.

Human insulin may still be a reasonable option for some people with Type 2 diabetes and is often prescribed for those who cannot afford the newer analogs. For those with Type 1 diabetes, human insulins are harder to live on, can lead to worse control, may make it difficult to hold down a job, and impact quality of life. Human insulins, whether generic or brand name, are less predictable and require a stricter and more rigid diet and time of use.  If you don’t adhere to a consistent eating schedule (including properly timing food consumption and insulin dosing) and carbohydrate quantity, you will experience recurring severe low blood sugars.

The eating regime would require consistent mealtimes with snacks between meals and prior to bedtime.  A sample regime may look like this (depending on weight, gender, age, etc.):

Maintaining the above sample regime may require a level of planning that is not always feasible at home, let alone in professional, educational, recreational, or restaurant setting.

An illustrative anecdote “Going out to Dinner?” written by a blogger, Nicki Nichols, was included in a Washington Post article by Ms. Audrey Farley published on February 19, 2019:

“‘You must decide on your meal before you leave the house. If you’re hungry for a snack, you must bolus the insulin and then wait an hour.’ To avoid life-threatening hypoglycemia (low blood glucose, which can lead to seizures and other complications), Nichols (the mother) had to compel her 5-year-old (who has diabetes) to eat every carbohydrate on her plate, even if she was already full. She also had to make her daughter eat by herself an hour before the family meal when ‘her father wasn’t even home yet.’”

Your life is ruled by the clock, and you lack the freedom and flexibility offered by todays’ newer insulin analogs.  The older Regular human insulin, such as Humulin and Novolin are short-acting insulins and must be taken several times a day.  It is the regular human insulin used to manage your blood sugar around meals but compared to today’s fast- or rapid-acting analog insulins which include Novolog (aspart), Humalog (lispro), and Apidra (glulisine), they work slowly. These fast-acting analog insulins start working on average in about 15 minutes, their peak of action is about 1-3 hours and last in the body about 3-5 hours.

Short-acting human insulins begin working in 30-60 minutes, tend to stay in your system a long time, up to 8 hours and peak nearly 4 hours after injecting it.  If you don’t eat every 2-3 hours while taking multiple doses of Regular human insulin, you will experience multiple low blood sugars.  The more modern rapid-acting analog insulins are active in your bloodstream almost immediately, peak in an hour, and their duration is only 4 hours.  This means, that if you use the more modern analog insulin,  you don’t have to feed that insulin dose 2 to 3 hours after taking it or risk dropping low.

On the other hand, the older NPH human insulin serves as background or baseline (basal) insulin which is what the body uses throughout the day.  NPH insulin is also called intermediate-acting insulin but like regular insulin it pales in comparison to modern background analog options. NPH takes several hours to become active in your blood stream and peaks at 4 to 6 hours after taking it.  Then it only stays in your system anywhere from 10 to 16 hours and must be taken twice per day to cover your 24-hour background insulin needs.

Today’s long-acting analog insulin options — Basalgar, Lantus (glargine), Levemir (detemir), etc. are generally “peakless.”  The peak in NPH contributes to the rigid eating schedule a person must follow if they’re using these older insulins to manage their blood sugars. Walmart has yet to develop their own brand of insulin that is “peakless.”  When you combine one of the long-acting peakless insulins with a rapid-acting insulin the action of the 2 analogs mimics the work of the pancreas and the potential for low sugars is minimized. 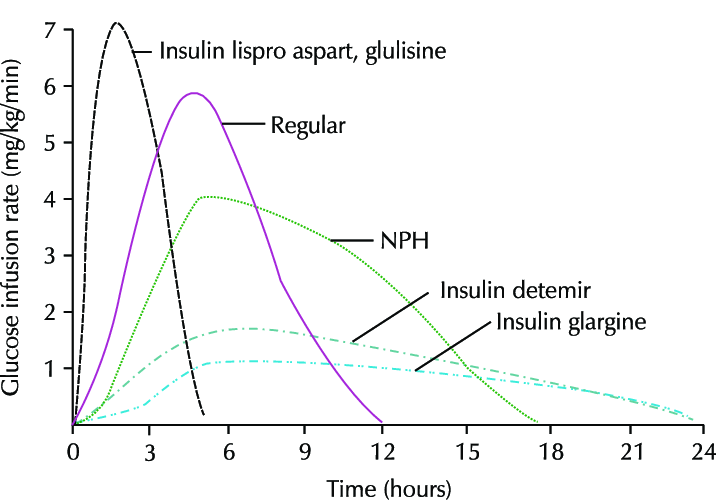 The older human insulins are especially challenging for younger children who have unpredictable eating habits or who are “picky” eaters.  They have less understanding of how important it is to eat a specific amount of food at a specific time of day.

The affordability of Walmarts’ human insulins is appealing but due the rigid schedule and their limitations they are often the “last resort” for diabetics.  Human insulins are viable options to keep you alive if necessary due to pricing considerations; however, patients transitioning to these insulins or starting insulin therapy using human insulins need to have support mechanisms in place and to exercise considerable care to optimize their safety.

1. “What You Should Know about Walmart’s Newest Low-Cost Insulin,” healthline.com, viewed 06.27.2021 at https://www.healthline.com/diabetesmine/walmart-relion-novolog-low-cost-insulin.”