Trying to pick the right insulin for your needs can sometimes feel like Goldilocks trying to pick the right bowl of porridge: there are many options, but not every one will fit your particular needs. Understanding the ways in which insulin products are categorized can help you begin to make sense of the different spectrums on which the various products exist, and the specific niche each category is meant to occupy in a diabetes treatment regimen.

Intermediate-acting insulin is one example of an insulin product category. Products in this category will share features that make them well suited for certain applications. This guide will first provide some background for understanding the variation in insulin products generally, followed by a discussion of where intermediate-acting insulin’s fall within that larger landscape of treatment options. Be sure to discuss with your doctor for more information on your treatment options, and always consult with your team of healthcare providers before making any changes to your treatment.

For many non-diabetic Americans, insulin is something they might recall discussing in biology class, or that they may have heard about on the nightly news. For diabetic Americans, however, understanding this vital hormone is critical to living a healthy life. So, what is insulin, exactly?

Though we are not consciously aware of it, the various organs of our bodies are constantly communicating with each other. One method of communication they employ involves sending chemical signals that cause other parts of the body to react in a certain way. This highly complex system of exchanging chemical messages is called the endocrine system, and insulin is an example of an endocrine chemical messenger.

In a non-diabetic pancreas, highly specialized cells (called beta cells) will produce and release insulin into the bloodstream in response to detecting elevated blood glucose levels. This should have two effects on the body: it should tell cells to start importing glucose from the bloodstream inside the cellular membrane to be used as energy, and it should tell the liver to stop releasing more glucose into the bloodstream. Unfortunately, in diabetic people, this communication system is disrupted – either due to damage to the beta cells in the pancreas (type 1 diabetes), or due to an acquired insensitivity to insulin (type 2 diabetes). Such individuals are therefore required to supplement their bodies with an external source of insulin, in order to maintain blood glucose levels within a normal range and avoid the long-term complications of untreated diabetes.

Are All Insulin Products Identical?

Since the discovery of insulin many decades ago, there has been a proliferation of many different insulin formulations and products available to treat diabetes. While these products do share the quality of being able to regulate blood glucose levels, they vary widely in nearly every other way.

The different properties of various insulin formulations can be classified with a handful of helpful metrics, which include onset, peak time, duration, and strength. Each describes a specific aspect of how insulin works within the body, making it easier for patients and their healthcare providers to find the most optimal match.

The onset of an insulin product (or any medication) describes the amount of time that elapses between administering (i.e., injecting) the insulin, and beginning to experience any reduction in blood glucose levels.

This metric describes the amount of time that elapses until the insulin is exhibiting its maximal effect. After the insulin has peaked, its effects will begin to diminish over time, until it is eventually no longer effective at all. Note that, in this context, “effective” merely means that it continues to have any effect whatsoever; it does not necessarily mean that it is fully effective at regulating blood glucose levels within a normal range.

Duration simply describes the total amount of time for which the insulin remains effective once administered.

The strength of insulin describes the number of standard insulin units contained within a milliliter of the product (it can also be thought of as describing the concentration of insulin). Many insulin products sold in the US have a strength of U-100, or 100 units per milliliter. However, this can change between products and countries, so it’s always important to know and check which strength of insulin you should be taking.

What is Intermediate-Acting Insulin?

As its name suggests, intermediate-acting insulin describes a category of insulin formulations that have an onset and duration of action that fall somewhere between the minimum (rapid/short-acting) and the maximum (ultra-long acting) available. They usually have a longer duration and onset time and maintain relatively consistent effectiveness throughout their duration without a pronounced peak in activity.

How and When Should Intermediate-Acting Insulin Be Used?

Intermediate-acting insulin is rarely taken on its own and is usually taken as part of a regimen of multiple insulin types, each with different activity profiles, and each playing a different role in the daily management of blood sugar levels.

Typically, intermediate-acting insulin serves as a ‘basal’, or ‘background’ insulin. It is not taken in response to any specific blood sugar spike but is rather meant to help the body deal with normal and subtle fluctuations of blood glucose that occur throughout the day and night. This need arises due to the fact that even when fasting between meals, blood sugar does have a tendency to creep upward as the body mobilizes glucose from its energy stores.

This means that it is not particularly well suited to deal with sudden, intense spikes in blood sugar such as those that might arise after a large, carb-rich meal. Such sudden spikes are typically better dealt with by mealtime (or “bolus”) insulin formulations that have a much faster onset and shorter duration and are designed for that specific purpose. Using mealtime insulin in addition to a steady background dose of intermediate-acting insulin is one example of a regimen that makes use of the properties of multiple insulin formulations to provide a patchwork of insulin coverage throughout the day. 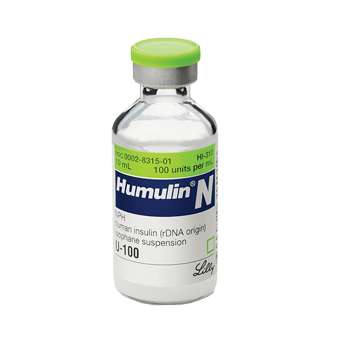 This formulation uses human insulin isophane, created in a laboratory using recombinant DNA technology and mixed with a suspension of ingredients that slow the action and metabolism of the insulin. It can be dispensed in both vial and pen form, depending on the patient’s needs and preferences. This insulin formulation typically has a strength of U-100.

This formulation is very similar to Humulin N. The two are mainly distinguished by the ingredients and manufacturing processes used to create each. However, the two formulations are both intermediate-acting and have very similar side effects and activity profiles. 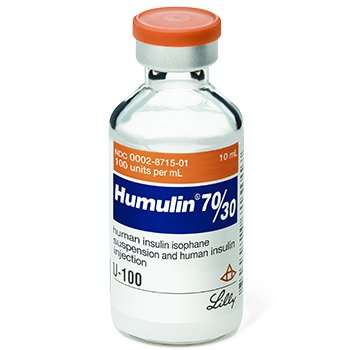 Common examples of pre-mixed insulin products are Novolin 70/30 and Humulin 70/30 (the numbers denote the ratio of intermediate-acting insulin to the other formulation in the mixture).

As with any medication, insulin carries the risk of moderate to severe side effects with usage. It is important to remember that no two patients are identical, and your reaction to insulin may be unpredictable and far outside of the norm. Always discuss any unexpected or worrisome symptoms that might be a result of taking insulin.

Two of the most common side effects of insulin usage are hypoglycemia and skin irritation at the injection site. Symptoms of hypoglycemia can include a rapid heartbeat (without any other explanation), dizziness, fatigue, blurry vision, tremors, and headaches. Ensure you monitor your blood glucose closely and report any of these symptoms to your doctor when starting or switching insulin formulations (as well as throughout your treatment).

Skin irritation usually develops in the form of thickened skin at the site of the injection. This can be mitigated by rotating through different locations on your body to use as injection sites.

More severe side effects can include an allergic reaction to the insulin or any of the other ingredients in the formulation. If you notice any unusual symptoms following injection, report these to your doctor, as they may be a sign that your body is reacting negatively to one of the ingredients in the product.

As we have seen, intermediate-acting insulin has a very specific role to play in diabetes management. It can be used to create a suitable background level of insulin, which can be supplemented with doses of other products throughout the day as needed.

While this guide provides a rough map of the interplay between various products, finding a detailed plan for any individual is a complex and detailed process. Speak to your doctor for advice on finding the best course of treatment for your diabetes.