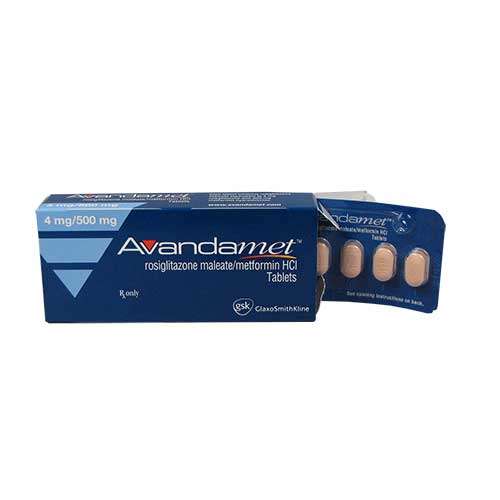 Avandamet is an oral anti-diabetic drug composed of 2 medications, metformin and rosiglitazone maleate. In combination, these drugs work to control blood sugar levels in patients with type-2 diabetes. Avandamet is intended to be used in combination with diet and exercise.

How does Avandamet work?

The 2 medications in Avandamet (metformin and rosiglitazone maleate), work in different but complementary ways. Metformin belongs to the class of medications called biguanides. This drug works by reducing the amount of glucose produced by the liver and by slowing the breakdown of carbohydrates. Rosiglitazone, however, belongs to the class of medications called thiazolidinediones, and works by allowing more glucose to enter fat, muscles, and the liver. In combination, these 2 medications work as a team to control blood sugar levels.

Avandamet comes in the following dosages and strengths:

The daily dose should not exceed 8 mg of rosiglitazone and 2000 mg of metformin.

Overdose of rosiglitazone is not well documented. Metformin overdose, however, can cause lactic acidosis and can be deadly if not treated. Early symptoms of metformin overdose are vague and include nausea, vomiting, diarrhea, abdominal pain, and loss of appetite. Advanced symptoms are low blood pressure, kidney failure, and cardiac arrest. Dialysis may be indicated to clear excess metformin from the body.

If you experience signs or symptoms of an allergic reaction, such as hives, rash, itching, difficulty breathing, or swelling of the face, mouth, or throat, seek immediate medical attention.

The most common side effects of Avandamet include:

Tell your doctor if you notice:

Get medical help immediately if you suspect diabetic ketoacidosis. DKA is a dangerously high blood sugar level in combination with the presence of ketones in your blood or urine. Symptoms of DKA include fruity-smelling breath, fast, deep breathing, and excessive thirst or urination.

This medication should not be used for the treatment of diabetic ketoacidosis, a life-threatening condition evidenced by a blood sugar greater than 240 mg/dL and the presence of ketones in the blood. Early symptoms of DKA include severe thirst and frequent urination. Advanced symptoms include fast, deep breathing, fruity-smelling breath, headache, nausea, vomiting, lethargy, and dry skin and mouth. If you’re sick, experiencing any of the symptoms of DKA, or your blood sugar is greater than 240 mg/dL, you should test your urine or blood for ketones. If ketones are detected, you should call 911 or seek immediate medical attention.

Avandamet is not approved for the treatment of type-1 diabetes.

Rosiglitazone is known to cause fluid retention and edema so Avandamet should be used cautiously in patients with existing swelling or edema. Increased fluid volume can lead to and/or worsen heart failure, so patients with heart failure should exercise extra caution when taking this medication.

Patients with diabetes are at an increased risk for developing eye problems and Avadamet can further increase this risk. Macular edema can be a complication of taking Avandamet, and seems to correlate with edema elsewhere in the body. A baseline eye exam should be performed before starting this medication, and eye exams should be performed regularly. If symptoms such as blurred vision or vision loss are noted, the patient should immediately be referred to an ophthalmologist.

Avandamet can increase the risk of bone fractures, particularly in women. Fractures of the upper arm, hand, and foot are the most common fractures seen with this medication. Care should be taken to monitor and maintain bone health. Notify your doctor if you have, or are at increased risk of developing osteoporosis.

Avandamet can decrease hemoglobin and hematocrit levels in the blood. Studies have shown a correlation between Avandamet dosage and blood count: the higher the dose of Avandamet, the lower the hemoglobin and hematocrit. It’s unclear if this decrease is due to dilution from fluid retention/edema or as a result of a vitamin B12 deficiency. Regular blood work should be performed to monitor blood counts.

Hypoglycemia is rare with metformin but can occur after exercise or if calorie intake is insufficient. Hypoglycemia can be seen with rosiglitazone, especially if being taken in combination with other anti-diabetic medications.

Lactic acidosis is a metabolic condition defined by a low pH and a high level of blood lactate. While lactic acidosis has many potential causes, an overdose of metformin is known to be one of them. Factors that can cause an unsafe buildup of metformin in the body are kidney problems, liver problems, and advanced age. Regular blood work should be performed to monitor kidney and liver function.

In general, caution is advised when administering Avandamet in a hospital setting. Avandamet should promptly be discontinued if the patient is septic, dehydrated, or hypoxemic. Avandamet should not be administered before any diagnostic procedure involving radiocontrast or before surgery.

Avandamet should not be taken concurrently with insulin as this increases the risk of cardiovascular side effects.

Do not take Avandamet if you are pregnant or breastfeeding as no studies have been performed to test the safety and efficacy in these patients.

Avandamet can decrease vitamin B12 levels in some patients. No symptoms have been noted with this decrease, but vitamin B12 supplementation could be recommended for some patient populations. Levels of vitamin B12 appear to rapidly increase upon discontinuation of the medication.

While Avandamet has not been linked to weight gain, a weight increase has been noted with rosiglitazone therapy alone. The mechanism of action is unclear but fluid retention and edema may be the cause of weight gain.

It’s important to note that this is not a complete list of drug interactions. Notify your doctor of all medications you’re taking, including vitamins and over-the-counter supplements.

Caution should be exercised when taking Avandamet in combination with cationic drugs that are excreted by the proximal renal tubule. Because metformin is excreted by the same system, competition can arise. This has been seen with cimetidine in particular, but it’s possible with other cationic drugs such as digoxin, morphine, procainamide, quinidine, quinine, ranitidine, and vancomycin.

With this diuretic in particular, one study showed an increase in the concentration of metformin when these drugs were administered concurrently. No studies have been done with long-term use of both medications so caution should be exercised when taking both.

Inhibitors and inducers of CYP2C8

These drugs can increase or decrease the concentration of rosiglitazone. E.g. Gemfibrozil, Rifampin

Nifedipine is a calcium-channel blocker that has been shown to increase the absorption of metformin. Caution should be exercised when taking both medications.

Notify your doctor of all medications you are prescribed. Do not take Avandamet in addition to insulin.

How can I lessen the GI symptoms of Avandamet?

To decrease upset stomach that can be caused by Avandamet, try administering with food. These symptoms can occur when initially starting this medication and may resolve in a few weeks.

What happens if I miss a dose?

Can I take Avandamet with insulin?

No, Avandamet should never be taken in combination with insulin.

Can I take Avandamet if I have type-1 diabetes?

How long do I have to take Avandamet before seeing an improvement?

It can take anywhere from 2 weeks to 3 months to see the full effect of this medication.

What should I do if I’m sick?

If you’re sick, continue taking Avandamet but check your blood sugar at least every 6 hours. If your blood sugar is greater than 240 mg/dL, test your blood or urine for ketones. If ketones are detected, seek immediate medical attention.

Who should not take Avandamet?

You should not take Avandamet if you are allergic to any of the components, have kidney problems, type-1 diabetes, or NYHA class III or IV heart failure. Avandamet should be discontinued if you develop lactic acidosis or are undergoing a radiologic procedure where you will receive iodinated contrast.